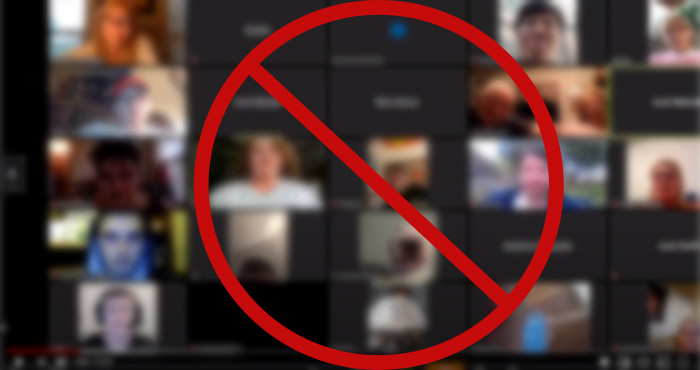 With working from home and remote learning happening across the country, everyone is jumping onto virtual meeting platforms, like Zoom. Alongside that shift, legions of pranksters have found ways to join private Zoom meetings uninvited with the goal of disrupting the call and harassing participants. A trend that has become so common it has engendered its own term: Zoombombing. While most of these situations are just idiots being idiots, in some cases, zoombombers have exposed themselves to children and posted hate speech.

Beyond the disruption zoombombers create in individual meetings, preventing kids from learning and workers from getting their jobs done, zoombombing has forced some school districts to cancel online classes entirely – making a difficult situation under coronavirus even more damaging for our kids. And there are many instances of zoombombers taking videos of sensitive conferences, such as Alcoholics Anonymous meetings, and posting the videos on YouTube and TikTok with participants personal information clearly displayed.

What makes this situation especially egregious is that many of those posting videos aren’t just doing it for fun – they’re doing it for money. Video platforms allow popular accounts to get paid for the advertising that appears alongside their videos – more video views mean more dollars. With zoombombing, these guys are literally getting paid for inflicting damage on others.

Zoom has taken steps to improve its security and educate users on how to prevent unauthorized attendees. However, that won’t stop zoombombers from profiting, or exposing personal information, from videos they’re already captured. Nor will it prevent zoombombing in the future if meeting hosts don’t properly secure their event.

The US Department of Justice (DOJ) has recently weighed in, declaring zoombombing an act that may violate various state and federal laws. And the DOJ , recommends that If you were the victim of a “teleconference hijacking” you should report it to the FBI’s Internet Crime Complaint Center. Though it is not clear how aggressive they will be in pursuing these acts, nor whether that will lead to any videos being removed.

So, the best way to punish zoombombers, and protect your and others’ privacy, is to report the video as violating the relevant platform’s usage policies. In many cases, this will get the video taken down. And for those accounts that are serial posters of zoombombing videos, enough strikes can lead to account suspension or termination.

I reached out to five of the major video sharing platforms – Facebook, Instagram, TikTok, Twitter and YouTube – to get feedback on what actions they would take against various types of zoombombing videos and which policies they may violate. Only TikTok and YouTube responded to my request. Both provided guidance on how to report these videos and removed the specific examples I sent to them. For the other platforms, I analyzed the terms of service and other policies to identify the reporting methods which may work best to have videos removed.

Generally speaking, Facebook is pretty aggressive about removing content that it believes is violating its terms of service (often, too aggressive). So you may have a good shot at getting zoombombing videos removed by reporting them, if you do so correctly.

Step 1: In the offending video, click on the three dots in the upper right corner and then select “Report video” (desktop) or “Find support or report video” (mobile).

Step 2: Select the type of policy you believe the video violates. The most relevant options are Harassment, Hate Speech or, if you click “Something Else”, you’ll also see Mocking Victims, Bullying, Sexual Activity and Sharing Private Images.

It’s difficult to say which policy violation is most appropriate or will have the best chance of getting a zoombombing video removed. However, you can review Facebook’s Community Standards to understand how Facebook interprets each type of violation.

Step 1: In the offending video, click on the three dots in the upper right corner and then select “Report Inappropriate” (desktop) or “Report” (mobile).

Step 2: Select “It’s inappropriate” on the popup and then choose the type of policy you believe the video violates. The choices are similar to Facebook (Facebook owns Instagram), with the most relevant options being Nudity or sexual activity, Hate speech or symbols, and Bullying or Harassment.

Get zoombombing videos removed from TikTok

TikTok is the video platform of the moment, especially for younger demographics, who are frequently the perpetrators of these zoombombing antics. When I contacted TikTok media relations with a couple of examples and asked about their policies, they removed the videos as “illegal activity”, based on the DOJ position I forwarded to them. I’m not confident that will be the case if others report videos as “illegal activity”, but it is one of the options. Here is the process.

You can learn more about TikTok’s policies in its Community Guidelines.

Twitter did not respond to my request for comment and, given their relatively hands-off history of content policing, is the one I have the least confidence will respond to removal requests. However, you can always try to have individual posts removed or, for those accounts that frequently post harmful content, report the entire account.

Step 2: Choose the type of policy you believe the zoombombing video tweet violates. Click on “It’s abusive or harmful” and then choose the most appropriate subcategory: Includes private information, Includes Targeted harassment, It directs hate against a protected category.

To report a Twitter profile, follow similar steps by clicking the three dots near the top of the profile and Report. Select “Their Tweets are abusive or hateful” and go from there.

You can learn more about reporting violations to Twitter on its site.

YouTube, as the world’s largest video platform, has no shortage of zoombombing videos, based on my research. It is also the easiest platform for posters to monetize, meaning more people are likely making money off zoombombing from YouTube than anywhere else.

When I reached out to YouTube about this issue, they responded quickly. According to a YouTube spokesperson, there is no policy against zoombombing, per se, but they have been active in removing zoombombing videos for violating other policies. And the impact of having videos flagged can be significant. One community strike can lead to a temporary suspension in posting ability, and three strikes in 90 days can lead to the channel being terminated.

In order to get YouTube to take action against a specific video, it’s important to get the complaint category correct. Here is my recommendation.

Step 1: In the offending video, click the three horizontal dots below the video and select Report.

Step 2: Choose the type of policy you believe the zoombombing video violates. If the zoombombers are using any racist or similar terms, or are belligerently abusing meeting attendees, select “Hateful or abusive content” and then either “Promotes hatred or violence” or “Bullying”. If your privacy is being violated, as in the case of a zoombombed Alcoholics Anonymous video that included attendee faces and names, select “Infringes my rights”, then “Invades my privacy”. You’re then going to have to go through YouTube’s onerous Privacy Complaint Process.

The net-net of all of this is that there are ways to get offensive and dangerous zoombombing videos removed from any of the major video sharing platforms, as well as, in some cases, punishing those who captured and posted them. But it’s not a sure thing. The best approach will be to have multiple people – e.g., everyone who was affected in the work meeting or class – report the video. The more reports the platform gets about a video, the greater the chance at least one of the reviewers will confirm and respond to the issue.