5 Things I Miss Most About Android

It wasn’t until this spring that I made the switch from iPhone to Android. Before then, I had put my iPhone aside for days at a time while I tested a new Android device, but I always went back to my iPhone. Frankly, I never really gave Android a chance.

Finally, the slow, 3G data speeds drove me to switch full-time to the Galaxy S II Skyrocket. And with all of the important apps I use now available on Android, that was no longer barrier.

Two weeks ago, I made the switch back—to the faster, bigger iPhone 5—because I assumed that, as a long-time iPhone user, I would enjoy it far more now that it, too, had LTE speeds. And there’s much to like about my new phone but, much to my surprise, I really miss Android. In fact, after a few weeks with my new iPhone 5, I realize that I like Android better. 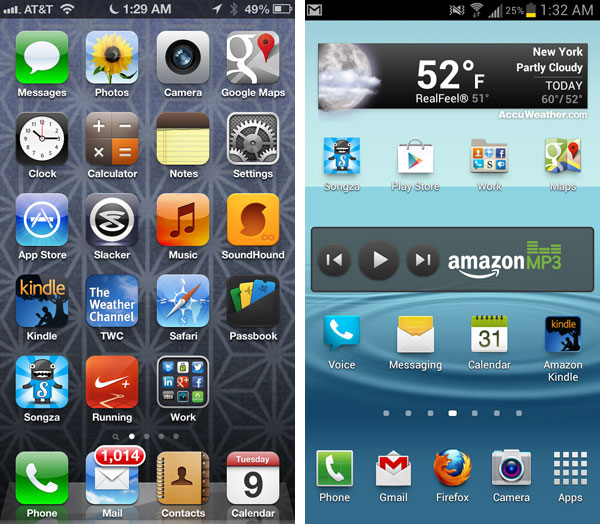 It wasn’t until I didn’t have weather on my home screen that realized how often I check it. Should I take an umbrella? Is the high 70 or higher (the cut off for pants versus shorts in our house)? I also had my family calendar and favorite music app loaded there. Yes, I could just tap an icon on my home screen, but I love the immediate gratification of widgets.

It's certainly handy to check text messages, incoming important mail, Tweets and other notifications from a pull-down within virtually any app. But iPhone stops there. With my Android phone, I also had direct access to frequently used settings, like turning on and off GPS and Bluetooth to save battery, as well as the settings app. With iPhone, I need to browse to and open settings where everything is buried a couple of layers deep.

Every day, at least one of the more than 100 apps I have loaded on my iPhone needs updating manually. With Android it happens automatically, unless the app privileges change. You simply get a notification.

I used Google Maps on my Android phone all the time—for local search, traffic, turn-by-turn spoken navigation and transit directions. So, like many others, I was really disappointed by the poor quality of Apple Maps. Apple has apologized to users and has even created a new section in the app store pointing people to better map applications. I just put a link to the Google Maps mobile site on my home screen. Still, I’d love to see Google Maps back as an option.

Thank you for sharing I am in the middle iphone or the galaxy? I was looking for more feedback and so happy I found yours. I really think I’m going to give Android a try.

Another Missing Feature on iPhone iPad

Give Android A Chance?

It’s possible I never gave Android enough of a chance, either. I got to try a Galaxy Tab for a few days, a year(?) or so ago, but between already being used to iOS and the just generally more polished Apple UX (at least at the time), I really didn’t like it. But a lot of what you describe here really appeals - particularly the widgets. And I’ve always felt more aligned with Android, philosophically speaking. Maybe time to give it another try…

Phones yes. Tablets? Not so much

Android phones are terrific, but Android still has a lot of catching up to do with it’s tablets. It’s not that the hardware is bad (the Samsung Galaxy Tabs are very nice devices), but the OS still isn’t as intuitive as iOS and the app selection for tablets still lags far behind the iPad.

I could have sworn this was an article about phones. Although, I’m sure there is a post dedicated to tablets around here somewhere.

The phone makes it or breaks it

My husband and I had Android phones - and we both absolutely HATED them. But, it was the phone - one of the LG ones - we couldn’t answer calls, half of the apps didn’t work right, mine turned off once and we couldn’t get it to turn back on (neither could Verizon) - the phone was horrible. We switched to the iPhone 4S about 6 months ago, and we will never go back. So, just be careful of the phone you get - I’ve heard the new Galaxy is nice… so be very careful. Yes, the Android system might be ok, but watch what phone you buy to run it on!!!

You are totally right.

The hardware makes all the difference between a good and bad Android experience. Choose the ones with higher CPU power and higher RAM memory. You have to pay attention on the company maker too. Some phone makers change the User Experience by messing up with the User Interface, therefore each maker has its own UI.
I personally prefer the Nexus line because they are PURE Android. The Nexus line is a Google brand which means that in most cases you will get updates directly from Google faster and you don’t have memory being wasted with the UI made by the phone company.
Apparently the next generation of Nexus will be produced by a few different companies. I can’t wait for the announcements.

I too was in a bit of a quandary over cell phone choices,I took a chance and went with the Samsung Galaxy S3 It is a true pleasure to work with, I thought that I would miss the slim clean lines of the Iphone but that’s not the case. I love my phone and I am so happy that I made the change to android!!

I am trying to decide whether to upgrade to an Android or and iPhone.  The Android app, EasyTether is one big reason I may stay with Android, especially with my unlimited data plan.  Another great Android app is “Call Blocker”.  This app causes blacklisted callers to go directly to voicemail without even ringing the phone.  You have both personal blacklist and a community blacklist compiled from such things as the federal do not call list. I can not find this in the Apple Store.

Don’t forget the obvious, like you can have spare batteries w/ Android phones, and you more than likely can have higher memory capability w/ the ability to add memory cards.

The article was about iPhone versus an Android Phone. So where did the table come in? Besides, the data suggests iPad is loosing it’s market share and has had to resort to a 7” tablet to try to capture that area where Android excels. Innovation? I think not!

Android vs Iphone hardware vs software

Nice article. Great look on the systems.
Here is how i view it.

Starting with the hardware:
Iphone produces high end phones only. They don’t bother with anything lower for the reason that they want to limit the phones that run iOS so they can produce updates that work perfectly and are fully tweaked to the phones

Android is run on multiple devices and there are low budget phones. As a result some phones are running perfect while others run like crap. It all depends on the budget you want to spend.

As for the software iOS is built for it’s simplicity & smoothness. It’s easy to get to know it and runs what you want it to run.

Android does close to the same and now worked on a smooth android version but Android provides you more options to change your looks on the phone. Allowing it to be changed as you see fit .... this sometimes provides a chaotic look but for most people it’s something cool. Even if you have the same phone and OS you can still change it to something “NEW”.
As a result like the articles discussed the weather widget is in Android just not where you want it. And by default they don’t do it. But also like android they do allow you to place it where you want with another app.

So in terms here is how i view it.

If you are a hardcore user of smartphones and like to modify or use your phone for more then the normal daily tasks then Android is a good road to take.

If you use your phone for daily usage and don’t want to use the phone for more then IOS is a good place. Doesn’t hold back though that Android is also a great starter as they both provide the same Daily task.

I went to Android and I really don’t like it. There are quite a few apps that Android doesn’t have that iPhone does. Like Snapseed and FilterForge. I will give it time though as I signed a 2yr agreement. I got a HTC but wish I had waited to get the Galaxy as they say it’s the closest to an iPhone competitor.

I have had the opportunity

I have had the opportunity to use an iPhone and then buy a Samsung S4 Galaxy i could see how well that van.i’m saving to buy a S6 that has a camera much better. Apple will have a lot to improve your iPhone if you want to retain their market share.