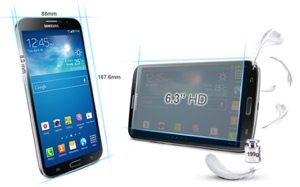 It may be too soon to say whether the Samsung Galaxy Mega is the next big thing. One thing’s certain though: The 6.3” Mega sure is big.

You read that right – the Galaxy Mega is a phone that clocks in at an almost absurdly large 6.3”, nearly the size of a HD Nexus 7 tablet. It may feel weird putting a supersized phone up to your ear, but this device is targeted at the mobile messaging and websurfing crowd.

Strangely enough, the phone that’s making waves for having a big screen falls short in the resolution department. The Samsung’s 1,280 x 720 screen has a disappointing pixel-per-inch count of 233, well under the 326 PPI of the iPhone 5 and the 441 PPI of the Samsung Galaxy S4. Sure, only the most display-focused people will notice the difference, but the Mega is clearly a display-focused phone. The rest of the phone’s specs are pretty standard. The Mega has a 1.7 GHz processor, 16 GB of memory (expandable via microSD), and an 8MP rear camera. You even get the standard color choice: white or black.

The Galaxy Mega will go on sale starting August 23 at AT&T. The phone will cost you $149.99 with a new two-year contract, or $24 per month with the terrible AT&T Next plan.