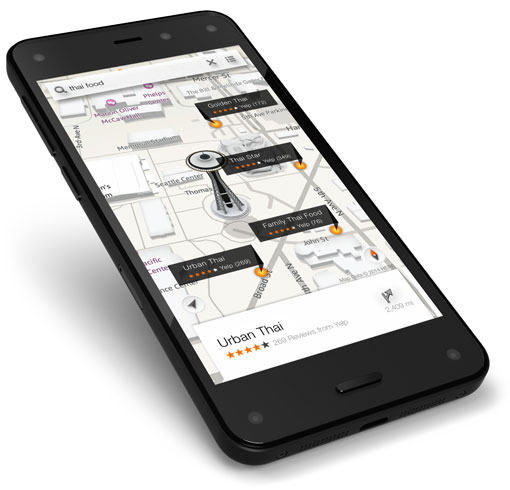 Amazon’s Fire Phone just may be the smartest smartphone ever, thanks to two revolutionary technologies: Firefly, which can identify things by sight and sound, and Dynamic Perspective, which lets you access more features and content in apps by swiveling and tilting the phone. 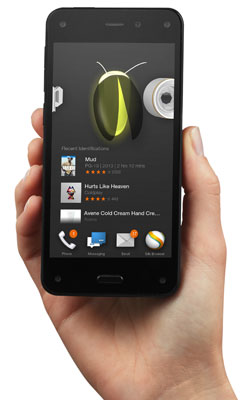 Press-and-hold the dedicated Firefly button and the Fire Phone's rear camera will capture and identify text, including phone numbers and email addresses, QR codes, and hundreds of millions of objects. Firefly also recognizes music, TV shows and movies. Once identified, Firefly will link you to either information, such as actors or plot details in a movie, or shopping sources.

Perhaps more wow and less functional than Firefly, Dynamic Perspective uses four invisible infrared cameras in the Fire Phone's front corners to locate your head in relation to the screen, then adjusts your viewing angle.

In practical terms, Dynamic Perspective allows true one-handed operation. Similar to Samsung's Smart Scrolling (but without eye control), you'll be able to scroll up and down through Web pages on Fire Phone's browser and Kindle e-books simply by tilting the Fire Phone – the more you tilt, the faster the scroll. Items arrayed on a carousel can be revolved simply by tilting the Fire horizontally.

In maps, you'll get a 3D perspective and can view sub-layers under pinned locations by tilting the phone. Dynamic Perspective-specific games allow a wider view of the action, as well as additional angles from which to play.

Amazon has opened both Firefly and Dynamic Perspective to developers to create app-specific functions. For instance, the Firefly-enhanced myfitnesspal app can acquire food-specific nutritional info and the wine app Vivino can identify vintages and suggest the right matching foods.

In addition to Firefly and Dynamic Perspective, Fire Phone includes dozens of additional smart touches, such as: 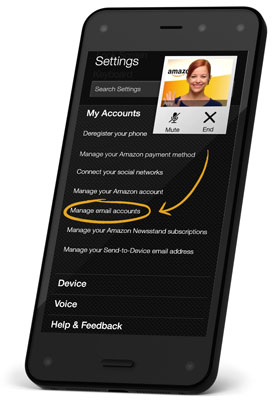 Mayday  lets you video chat with a remote tech
support person, who can watch what you're
doing on your screen, annotate the screen (as
shown) and even walk you through a task.

Also included on the Fire are a plethora of features ported from the company's Fire HDX tablets, such as Amazon's live video customer service Mayday assistant, Amazon's Miracast-powered Second Screen to fling video to TV through any Miracast device, such as Fire TV, Kindle's X-Ray function, which surfaces content for TV shows and movies you’re watching, and instant-start video streaming that’s available with ASAP (Advanced Streaming and Prediction).

Spec-wise, the Fire Phone competes at the mid to high end. It features a 4.7-inch 1080p HD display protected by the latest scratch-resistant Gorilla Glass 3 and a rubberized frame.

The rear 13MP camera sports a fast f/2.0 lens and has optical image stabilization, and there’s a 2.1 MP front-facing camera.

Amazon doesn’t skimp on audio. The Fire Phone has dual stereo speakers and Dolby Digital Plus surround sound. You also get flat rubberized tangle-free stereo ear buds with magnetized tip that clasp together when not in use.

For connectivity, there’s NFC, WiFi ac and Bluetooth 3.0—not the Bluetooth 4.0 LE, which many of the activity and health monitors require.

And powering the phone is a quad core 2.2 GHz processor with two 2 GB of RAM.

What you're not getting is access to the full Google Play app store, which means you won't be able to get some apps. And, there's no Bluetooth 4.0/LE, which makes the phone incompatible with many activity and health monitoring devices. That's a big, unnecessary flaw that Amazon shouldn't have overlooked.

For new or less savvy smartphone users, the Fire Phone is hands down a great option. More savvy users will want to weigh the conveniences of the Fire Phone against a full access of a regular Android model, like the Samsung Galaxy S 5 or HTC One M8.

Unfortunately, for whatever reason, executive management of Amazon decided to make Hate T&T the one and only exclusive cellular service company to sell its Amazon Fire.  BAD MOVE on Amazon!  First off, Why would anyone in their right mind want to lock themselves into a 2 year contract with a company that is known for its high rates and fees let alone poor customer service!

Lastly, although the Fire has a few gimmicky programs in it, it still is a med level phone at best spec wise.  You can get MUCH better deals on top tier phones for less money!

I agree. The fact that AT&T is the exclusive provider immediately takes me, and millions of others, out of the loop of potential buyers. In fact, if the phone was free, I still would not want it, because I would have to deal with AT&T. Bad move Amazon.

I would seriously consider trying out the Fire except for the fact that…as everyone else has pointed out…Amazon screwed the pooch making AT&T their exclusive carrier.  I have tried AT&T twice and the 2nd time I paid over $300 in penalties for breaking my contract because the service was so terrible.  What was Amazon thinking?