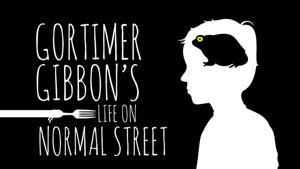 According to the show's creator, Gortimer Gibbon's
Life on Normal Street
"is a look at the lives of
three quirky but lovable tweens who survive
together in a surreal world of eccentric characters
and strange happenings."

After meeting much success with its original series Annebots, Creative Galaxy and Tumbleaf, Amazon Prime is doubling down on kids’ programming by ordering five new pilots aimed at both younger viewers and those aged 6 to 11.

“For the first time, we are offering live-action and animated programming for older children and continuing with entertaining, educational programming for preschool-aged children,” announced Ray Price, director of Amazon Studios.

The new shows represent both an interesting mix of content and an interesting mix of writers and producers of all stripes. One show, Grid Smasher, comes from Dan Clark, a writer credited with Yo Gabba Gabba and Teenage Mutant Ninja Turtles. Another, Gortimer Gibbon’s Life on Normal Street, is a show for tweens from David Anaxagoras, a first-time writer.

The five new kids’ shows given the greenlight by Amazon are:

When the pilots are finished, Amazon will make them available for viewing and comments like the last batch of originals, giving you and your kids the power to decide what shows make the cut and become full-fledged series. The first batch of Amazon kids’ originals will be available for streaming later this year and into 2014.