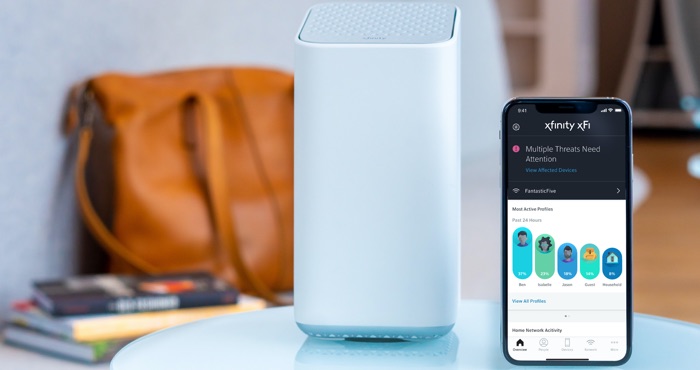 Comcast’s 18 million Xfinity internet customers will have two good reasons to keep renting their modems from the media giant in 2020. While Xfinity users could skip the rental fees by snagging a compatible third-party router (for $150-$300), at CES 2020 Comcast unveiled the next generation xFi Advanced Gateway. Equipped with the latest features, the xFi Advanced Gateway may be enough to keep Comcast customers renting.

But speedier home internet isn’t the only thing Comcast is showing off at CES. The internet delivery giant also announced it will wrap its (previously) $5.99 a month xFi Advanced Security package of cyber-protective tools into the existing price of a Xfinity gateway rental. So that bonus protection package will essentially become free with a customer’s $13-a-month hardware charge.

The pro-active xFi Advanced Security package uses AI and machine learning technology to monitor and analyze Wi-Fi traffic in the home and, automatically blocks identified suspicious activity in real time. It can prevent you from inadvertently visiting malicious sites that lead to phishing attacks; block remote access to smart devices from unknown or dangerous sources; and monitoring your devices in real time and sending alerts when
the devices are behaving in unusual ways, which can be signs of a network threat.

“We feel very good about these new additions, that keep adding value and making sure our products are ahead of the future curve,” said David Puckett, Comcast Xfinity VP for xFi and Digital Security product management.

The xFi Advanced Gateway is Comcast’s first device that can deliver true multi-gigabit speeds. It supports the latest Wi-Fi 6 standards, which offers speedier connections (as long as you have devices that support it). Wi-Fi 6 allows for data speeds up to 9.6 Gbps, up from 3.5 Gbps on Wi-Fi 5. This new Wi-Fi standard also lets your router communicate more efficiently with multiple devices, which will keep things running smoothly as we add more smart home tech to our home networks.

To pull off these goals, the next generation Xfinity gateway is packed with four simultaneous dual band antennas, a 2.5 Gbps Ethernet port, Bluetooth LE and Zigbee radios and switchable mid-split support between 42 MHz and 85 MHz to allow greater upstream throughput.

But even though the new xFi gateway is fast, not all of your devices will support Wi-Fi 6 speeds — at least not yet. The newest smartphones, like the Samsung Galaxy S10 and iPhone 11 line, are compatible with Wi-Fi 6, and it’s likely that the next generation of connected devices will support the latest standard, too. However, it doesn’t matter how many Wi-Fi 6 devices you have if you don’t have a router that also supports Wi-Fi 6. Comcast’s new xFi Advanced Gateway is an important part of your home network because means you’re ready for faster speeds as soon as they’re available, so you’ll make the most of new tech for years to come.

The xFi Advanced Gateway will initially be offered to customers who subscribe to Xfinity speed tiers of 300 Mbps and higher “and then to other tiers as our supply expands” said Puckett.

Customers can be assured they’re nabbing the new model modem/router as it’s packaged in white, rather than in the black case of its identically-named and shaped predecessor. Check with Comcast about whether your router supports Wi-Fi 6 to be sure you have the latest tech.