How to Tell if Your Child is Being Cyberbullied 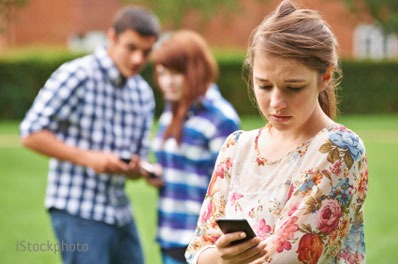 Teens and preteens have always picked on other kids face to face, but when you add technology to the mix, with both its easy anonymity and its constant presence in young people's lives, you have a whole new animal to tame. "Cyberbullying" is harassment that takes place during online interactions, including but not limited to:

While angry teenagers have always been ruthless toward their targets in person, when they're wired they can take their hostility to a new level. Technology has ushered in an era of cruelty, and our teenagers are in the forefront of it.

The most disturbing aspect of cyberbullying is that it takes away from the victim any place of amnesty. Attacks can hit their targets in the bedroom, the living room, in the family car — anywhere there’s a computer or a cell phone. According to a study by Internet safety experts i-SAFE:

More than half of U.S. teenagers, struggling to make sense of adolescence and their own identities, have fielded false rumors and humiliating comments about their looks, habits, social lives, or sex lives, via the Internet. Almost half of those teens have had this occur repeatedly. Teens are facing an entirely new medium for social ugliness, one that parents have never encountered and may not completely understand. Let’s take a closer look.

It Never Goes Away

Online harassment is quick, faceless, and virtually everlasting. Once someone posts a nasty comment or a vicious blog posting about your child, it’s almost impossible to delete it. Such postings have legs, so to speak. Once they take up residence on a site like Facebook, they can get passed around quickly for all of a victimized teen's peers to see. Other comments can take a spot near the top of Google searches for an innocent young person. In this way, the harassment infiltrates the classroom, the lunchroom, and even the faculty room. And the effects can linger for weeks as new people discover the offending blog, photo, or comment.

How bad can cyberbullying get? On one occasion, a classmate sent an onslaught of disturbing images of bloody razor blades to a ninth-grade girl known as a "cutter." (Cutters are distressed or depressed teens who intentionally mutilate themselves, usually with sharp objects, as a cry for help or a way of coping with stress or overwhelming emotions.) While the girl was in her school's computer lab, she logged onto MySpace with her secure password only to find that her personalized home screen had been vandalized with the razor photos. MySpace was the ideal location to launch this attack precisely because one's profile is so personal. Finding it vandalized with psychologically abusive images is such a violation that it can send an already depressed teen into a debilitating downward spiral. Victims of cyberbullying are more likely to get a detention or be suspended, skip school, and experience emotional distress, according to the Journal of Adolescent Health, and they're far more likely to feel unsafe at school.

"I don’t think many adults understand the extent of harm that can be done," one mother told me. "There’s more to this than just a few lines of type and nasty gossip." A fake MySpace or Facebook account, set up with doctored images and text contrived to humiliate a teen is a real blow to that person's self-esteem and identity.

Signs That Your Child May Be a Victim of Cyberbullying

How to Start a Conversation About Cyberbullying with Your Child

Parents to the Rescue

The reality is that your children’s social world is now predominantly online, where few adults can track it, and their cyber-relationships are highly susceptible to vandalism and bullying. As a parent you can play a key role in teaching the teens in your life to practice compassion, but to establish your credibility, it's important first to become literate in the technological devices they use. You can also encourage teens to agree to consistent limits on the use of such tools as digital video cameras, cell phones, iPods, and computers. Teens exploring and experimenting with these devices late at night in an unsupervised environment may be tempted to use them to hurt others.

But the most valuable instruction you can give your children is teaching them how to cope with the traumas the world may inflict on them. The most important life-skill a teenager can learn is also the most painful — how to handle hurt. You can't launch a crusade against every instance of cyberbullying, but you can focus your love and wisdom on preparing children to bounce back from such attacks in a healthy, productive manner.