Glove App Determines Which Wireless Carrier is Best For You 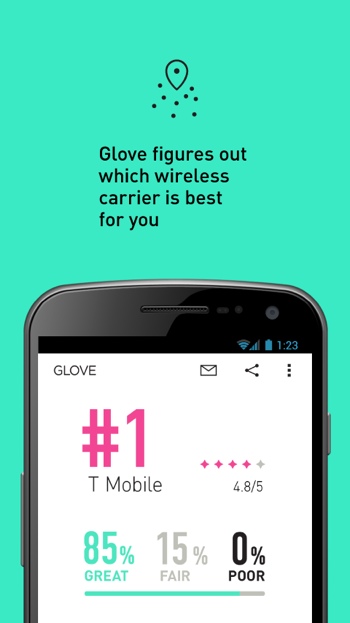 Wireless carriers make a lot of claims about their service that can be hard to sort out. Verizon claims it has the most reliable and complete 4G LTE network. Analytics firm Root Metrics says AT&T’s LTE network is the fastest. T-Mobile disputes that, stating its speeds are the best. But which network is the best for you?

As it turns out, the answer to that question depends entirely on where you work, live and play. New Android app Glove promises to find the right wireless carrier for you based on each network's signal quality in the places you frequent.

When you download and load the app, you’ll be asked to run it in your phone's background, letting it analyze the signal quality of your current carrier. That information will be sent back to Glove, analyzed, and compared against the speeds experienced by other users in the same areas.

Glove emails you your results when they’re ready, ranking the carriers in your area. The entire process takes 3 days.

The Glove app, in beta, currently works in New York City and San Francisco only. Its developers promise more cities will be added soon. An iOS version of the app is also coming later in the year.

Glove is available for free download on Google Play (Android). To learn more about Glove, visit the company’s website at glove-app.com or check out its promotional video below.