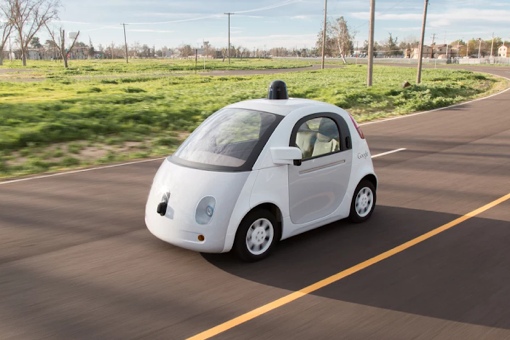 Google’s self-driving car project has just reached another noteworthy milestone. This summer, the company’s latest prototype vehicles will hit the road in Mountain View, California for testing under real-world conditions. The cars require no human input while driving, though all will be tested with a safety driver aboard.

The adorable new iteration of the Google self-driver looks a bit like a koala’s head on wheels. Each has a top speed of just 25 MPH, and operates by means of a pre-loaded street map data and a complex network of sensors to detect other vehicles, pedestrians and other road hazards. The cars have a removable steering wheel, accelerator and brake pedal in case its operator needs to take over the controls manually.

There’s a lot of excitement surrounding self-driving cars. The technology has the possibility to significantly reduce the number of traffic accidents on the road by removing the problem of human error. A recent report revealed that human operators were responsible for the only accidents involving Google’s cars over the last 6 years and 1.7 million driving miles. Self-driving cars would also be a huge accessibility benefit to those who are legally blind, and could reduce traffic congestion by driving in more efficient patterns than humans do.

There’s no set public launch date for self-driving Google Cars, though many expect the tech to be ready by the end of the decade. Google Cars will be primarily used for taxi-like functions, and may not necessarily be sold direct to the public. Other car companies are working on self-driving tech for consumer vehicles, including Nissan and Tesla. Both expect the tech to be available in their cars by 2020.

If you want to learn more about this amazing technology, you can read up over on the Official Google Blog. Google has also just released a new video showcasing its cars; we’ve embedded it below so you can check it out as well.

The self driving car technology

The self driving car technology is really exciting. It reminds me of when I was kid looking at the cars on the Jetsons Cartoon. The new car v2v technology is also cool.

The self-driving car industry is

The self-driving car industry is evolving forward as we speak and everyone is trying to get a share of the excitement. Even though the infrastructure has not progressed as rapidly, but its development is well underway. Soon, every party whether individual or at a commercial level will get to enjoy the benefits that this industry brings.