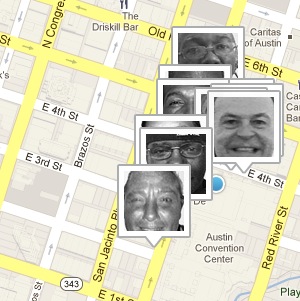 In what project creator, ad agency, Bartle, Bogle, Hegarty (BBH) is calling an experiment, homeless men were outfitted with 4G MiFi devices. Known as Homeless Hotspots, the participants currently roam the streets of Austin, Texas at the South by Southwest tech festival.

The 13 men chosen wear t-shirts that read "I am a 4G hotspot" as well as their name and the words, "I am a homeless hotspot." Additionally, their shirts display a code for logging in.

https://www.techlicious.com/fckeditor/editor/images/spacer.gifBBH explains that the suggested donation of $2 for 15 minutes of use of the human hotspot goes directly to the homeless bearer of the signal. The company likens their project to the Street Newspaper model, in which homeless sell papers in some larger cities. The difference is, however, that Street Newspapers feature articles written by the homeless on issues affecting them.

The campaign has come under fire from critics who find it dehumanizing.

The project was created to raise awareness of homelessness, and only the homeless reap profit. BBH executed a similar, widely praised, project, “Underheard in New York,” in which homeless are given mobile phones and unlimited texting accounts to tweet their experiences.

What do you think? Is Homeless Hotspots dehumanizing or a effective way for the homeless population to earn a few bucks and let the public know more about their situation?

I feel bad for laughing at this, but its funny and sad at the same time…

As long as these unfortunate homeless people are NOT being forced to do this, it’s their choice. They, probably, like the opportunity to earn a few bucks. To me, this seams like a ‘win win’ situation. Who loses, here?

I agree.  I view it as providing jobs to people who need them.  I would rather buy a service from a homeless person than be accosted by them begging for money.  I just worry about their safety, criminals will know that they have desired technology and money and they might be easy prey.

The message is “I have a service, you can purchase it”.  Unless there is some coercion involved of these homeless people by the company, why is there any controversy, especially since the project was created to call attention to the local homeless situation?
Since I think the project of roaming hotspots is ingenious, I applaud the company for employing homeless as long as their altruistic goals were sincere.  If it’s successful, the hourly total is comparable to minimum wage.

Not at all sure

I volunteer with a food pantry and with a transitional housing project in my local area, and I can really see two sides to this. As previously commented, it is a way to earn a few dollars, and to call attention to homelessness, but is this the demographic that will do something about it. Other than donate a couple of dollars to a person they would normally ignore, or not see?

However, it might spark conversation amongst people that have the means to do something about it.  It’d just take 1 who fires up his/her friends about it to change a few lives.

As long as the people participating are doing so willingly I think this is a great idea!

Homeless Hotspots is creative and productive ... providing an important service and opportunity for all involved!

This is a business that the homeless can do. They provide a service that others need. Find a niche and fill it and hopefully people who are better off will give them more than is asked for.

After SXSW, they are going to take away the 3G wireless device and just turn these people back out to live in the street again.

It seems to me like they are exploiting the people doing this. There are a lot better ways to make people aware of homelessness and want to do something about it…

I really can’t see standing on the street using the Internet. I’ve had problems getting engrossed in my phone or my iPad and losing situational awareness – i.e.; people walking towards you, stepping off curbs, in front of cars, that sort of thing.

This is the best assessment of the situation, to my way of thinking. Why not do something constructive if they will let you (a lot of homeless are either mentally off or paranoid from urban legends they pass around).

I feel this is a creative way of helping those men. Most homeless are really ‘invisible’ to the rest of the population. Now, they are able to provide a service, at a reasonable price with the opportunity of raising awareness of their situation. Who loses?

I’m with you! this is a great way for homeless people to make money and at the same time be able to help theirselves. This is a great idea!! I was homeless once for many years and i have been off the street for 3 years now and i would love to see the homeless people get recognized for their part and get paid more than $2 for it!!

I think this concept is a great idea & it also puts a few dollars into the less fortunate. However $2.00 REALLY? Companies make a lot more money than that, they could have at least said here is $20.00 for doing this to each one of these people. Bring this awareness to other states & offer better incentives like a gift card for subway or walmart.

I think this concept is a great idea & it also puts a few dollars into the less fortunate. However $2.00 REALLY? Companies make a lot more money than that, they could have at least said here is $20.00 for doing this to each one of these people. Bring this awareness to other states & offer better incentives like a gift card for subway or walmart.

What's Demeaning is Homelessness.. Not a Short-Term Job

There was a segment on NPR’s “Marketplace” program the other night on this, and it did address the squeamish factor: people of means buying something from people with no means.

But isn’t that what our workplace economy is all about?  We all, in one way or another, sell our time & our skills to people (companies) with means.

And so it seems to me that this kind of innovative response to an unresolved and growing social issue is to be applauded and encouraged.

How many more tech-savvy people might be inspired to innovate some other homeless-employing project, as a result of an interaction with Homeless Hotspots?

Perhaps one of them will dream up a way to continue to employ these people—who are now no longer “invisible”—after the tech conference ends?

I can kind of see both sides - but my gut tells me that making some money legitimately and possibly getting at least some people to wake up and think about homelessness is the stronger idea.  I do agree with several other comments - only $2?  Please!  If you are nerdy enough to carry that kind of stuff with you everywhere, you probably have $5, $10 or $20 to spare to save a life.

Interesting that no one is saying anything about the health effects on the person “wearing” the “device.” They must be pumping out massive amounts of broadband EMF radiation, and I can only imagine this would be way beyond illegal to do to a person in many countries in Europe. But in the USA we haven’t acknowledged the potential dangers of EMF exposure—thanks to plenty of greedy industry pressure on the greedy Congress.

When very poor people become just a way for the rich to make more money, I think we will have hit bottom as a society. This may take us one step closer.

I had to laugh at Occupy when almost everybody pulled hundreds of dollars of electronics out of their pockets while occupying. I’m old school where we just went and made our point with our mouths and our feet.

Having a husband who has talked with several homeless men, I have a different viewpoint i suppose. It COULD help those who need that extra boost to get a job, however a large portion of homless, well, like to be homeless. they don’t want jobs and are happy with being accountable to no one. I know many men who would just use the cash for alcohol or drugs, not neccicarily what us middle-class-ers would do. some homeless situations are unfortunate, and some are intentional. But doing this hotspot deal at least has the potential to make for less begging.

While it is good that a few people have the opportunity to tell their important stories and earn a litte money, it seems pointless unless it combined with the opportunity for those who see the “homeless hotspots” to donate to local agencies who provide services toward self sufficiency.

I think it is a great way for them to make money. And it also will raise awareness of the Homeless population in Austin during and after the festival.

There are possibilities here...

Having once “been there”, I can see where a few extra bucks always come in handy. I can also see how an enterprising but down-on-his-luck person might get into the one conversation that could turn his life around. It happens, and if it happens only a few times, it’s worth everything. Thanks, from someone who never forgot!

When I met the great love of my life, years ago, he was a freelance mechanic, and used to offer down-on-their-luck men a chance to help him for pay. If they seemed hungry, he’d feed them whatever he was eating. He never asked what they would use the money for; if he paid them and they didn’t come back, he didn’t stop hiring them, or anyone else. This unquestioned giving of not just money but dignity of work on a small scale never depended on the other person’s behavior. It was what Christians would call giving “to the least of these” and it was what drew me to him. I don’t know who thought of this idea we are discussing, but the thing I thought of first was the spirit of it, and that is what I most want to see fulfilled. I would rather be wrong believing the best of people than be right believing the worst.

I think it is a

I think it is a good idea but the execution is the problem.  If they had offered to pay college students to do it, it would not have been an issue. The other problem is the amount of money.  Seriously what is anyone going to do with that amount of money?  Also, how come these couldn’t have been stationary posts?

One can wonder whether the *contractor* hotspotters had streetwise input on methodology!

Did/Does anyone know [?care!] whether such events include folks who actually donate$...otherwise!
IF the marketing folks are so good-natured, we can anticipate actual followup to know the success of venture…for vendors and vendored!

It’s a Good Idea cloaked in a Flawed Process.

If I hire a homeless person to wash my car or mow my lawn, would this also be news?