The iPhone and iPad have both run on iOS since the very beginning — but now Apple is giving the iPad is own operating system. While iOS 13 is heading to the iPhone this fall, the iPad will be getting the very first version of iPadOS. At first glance — and maybe even at second glance — iPadOS looks almost the same iOS. And it will receive a lot of the same upgrades, including the "Sign in with Apple" privacy feature, the new swipe keyboard and dark mode. Other updates are subtle, but they make the iPad a multitasking powerhouse that might even be able to replace your computer.

The first difference you’ll notice is on your home screen. Icons are spaced more tightly, no longer restricted by a layout designed for an iPhone. You can also now pin widgets with real-time data updates directly to the the home screen, where they’ll float to the left side of the screen. Leave them there or hide them with a swipe. All in all, it makes much better use of the larger space of the iPad screen.

Easier than ever multitasking

But the iPad’s biggest weakness, compared to the typical computer, has always its limited ability to multitask. Apple has cobbled together multitasking features over the years, letting you run apps in a sidebar or a split screen mode, but even so, it’s been clunky. iPadOS refines these multitasking abilities, letting you show two or more windows on your screen. You can have two windows of the same app — for example, two windows for different documents in Notes or Microsoft Word — or different apps in a split view.

Everything works with drag and drop. You drag apps around to open a split screen, or you drag images, text, or other content around to paste it into other apps. Meanwhile, new gestures make it easy to navigate from app to app. There’s even — finally — an undo gesture so you can easily backtrack if you make a mistake. The new multitasking features makes it easier to do this kind of editing work — and new gestures and keyboard shortcuts support these tasks.

The whole system is easy and intuitive, something that can’t be said for multitasking on the iPad today.

An updated Files app brings a desktop-like file hierarchy to the iPad. Files currently lets you browse through your files on on iCloud Drive, but it’s a simple list where you tap your way from folder to folder to see what’s in each. The new app looks a lot more like Finder in MacOS, letting you browse folders more quickly and see details on each of your files. 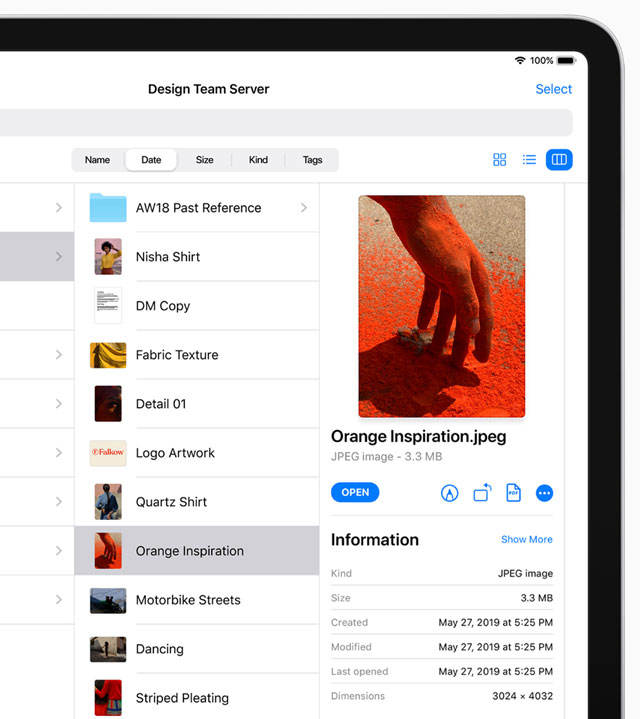 iPad’s file management has always been limited: the files on your iPad were the files on your iPad, and there wasn’t any easy way to move data around. The Files app has made storage a little more accessible by letting you easily store and view things via iCloud Drive as well as your iPad’s storage just like you would use any computer’s storage.

In addition to the standard saving and organizing, you can share folders (much like Dropbox) and use USB drives for extra storage — or use your iPad’s memory for extra storage. Safari even has a file manager to make it easier to track and organize downloads. And a nice perk for photographers: you can plug your camera directly into your iPad to import photos, no second step required.

iPadOS may look like iOS, but it’s peppered with great features that will make your tablet more like your computer. Depending on what you use your computer for, iPadOS could be the first step towards replacing your computer entirely with iPad.

Like iOS 13 and the new privacy features, iPadOS will be a free update later this year. While Apple didn’t promise a specific date, the company typically rolls out iOS updates in mid-September, and iPadOS seems likely to launch at the same time.