Jitterbug Touch 2 is a Smartphone for Seniors 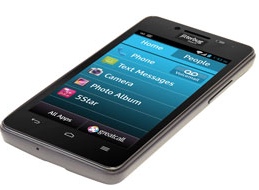 Keeping seniors up to date on modern technology isn’t always the easiest task. When my grandmother got a cell phone in the early 2000s, she insisted on calling it a “car phone” and kept it safely stored in the trunk of her vehicle at all times. My 60-something father, meanwhile, still uses a 5-year-old clamshell phone he inherited for free. He likes keeping it turned off to “save the battery.”

Greatcall’s Jitterbug phone line is aimed squarely at this audience – older folks who want a portable phone but are intimidated by complexity. The line's latest offering, the Jitterbug Touch 2 smartphone, offers a balance between the most powerful and desired smartphone features and ease-of-use.

The Jitterbug Touch 2 uses a custom Android (4.0) skin that keeps the smartphone simple. Rather than feature multiple screens full of icons, the Touch 2 instead uses list-based menus. Popular apps are intuitively named for an older audience: Instead of Chrome, the name of the phone’s web browser is simply “Internet.” The phone also comes loaded with a number of medical apps and emergency response features.

The phone’s specs are pretty basic, trading unneeded power for a low price. You get a 4-inch, 800 x 480 display that features large, legible letters for older eyes. The phone has a 5MP rear camera for photos and 4GB of storage, which should be plenty of space.

Do you have any idea

Do you have any idea who the manufacturer is? I know Samsung has made some jitterbug phones, and when I look at the instruction manual of it, it has a Huawei logo

Yes, the manual had the

Yes, the manual had the clue. The manufacturer is Huawei.

I like the Jitterbug phones because it is designed with seniors in mind and offers all the senior lifestyles need from talk to safety and health care services.

I’m using the Jitterbug touch 3 which is decent for me. but I’m looking to buy the Jitterbug Smart, which is a Jitterbug phone, it has a bigger screen and for sure improve the selection on the touch screen.

Dose any of the Jitterbug works with the AT&T network?