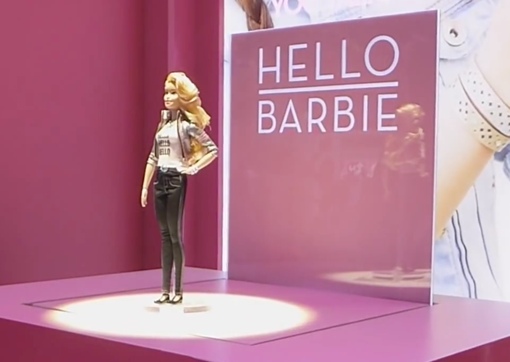 Mattel’s new Hello Barbie toy really caught our eye at the North American International Toy Fair 2015, held earlier this year in New York City. It’s a ‘smart doll.’ When you talk to it, your voice is recorded and uploaded to a server for processing and analysis. The server then sends a suitable response back to the doll for it to speak. Over time, Hello Barbie learns about you and your family, integrating this information into her responses.

For a young child, this level of interactivity can be a lot of fun – after a few days, Hello Barbie might learn the name of your daughter’s beloved pet and the fact that she wants to be a doctor when she grows up. But parents haven’t been quite as enthused about the Wi-Fi connected doll. They, along with tech privacy experts, are concerned about what Mattel will wind up doing with all the data it harvests from the innocent mouths of babes.

“Kids using Hello Barbie aren’t only talking to a doll, they are talking directly to a toy conglomerate whose only interest in them is financial,” says Susan Linn, director of the Campaign for a Commercial-Free Childhood. “It’s creepy – and creates a host of dangers for children and families.”

Mattel, for its part, is assuring parents that it will be a responsible steward of childrens’ communications. “Mattel is committed to safety and security, and Hello Barbie conforms to applicable government standards,” the company said in a statement to the Washington Post. “The data is never used for anything to do with marketing or publicity or any of that stuff,” confirms a spokesperson from Mattel partner ToyTalk, the San Francisco-based startup behind the response system.

But just because Mattel won’t use your kids’ data for advertising purposes doesn’t necessarily mean that Hello Barbie is 100% safe. Parents can choose to have Hello Barbie’s conversations recorded and send to their inbox in the form of daily or weekly emails. A hacker (or snooping family member) could potentially intercept these conversations from your computer or by breaching the ToyTalk servers.

Hello Barbie is expected to hit store shelves sometime this fall. The exact privacy policy for the web-enabled doll is still in the works; parents will need to agree to it before the doll will function. To learn more, check out the short video of the doll below which Techlicious recorded during the Toy Fair. For more on this year's hottest toys, check out our Best of Toy Fair 2015 awards.