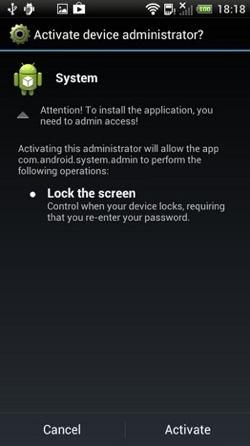 It’s “the most sophisticated Android Trojan” to date: Security experts at Kaspersky have identified a new virus that aggressively targets Android phones, attempting to take over devices to make costly calls that run up your wireless bill.

The Trojan, Backdoor.AndroidOS.Obad.a, begins its infection by requesting Device Administrator privileges. Once obtained, the virus hides itself and becomes impossible to remove. And because the malicious code operates in background mode, it will not be immediately apparent that your phone has been hijacked.

The scariest aspect of the Trojan is the level of control it offers strangers over your phone. Once installed, it can edit, send, and receive texts; use the internet; access all your personal data, contacts, and files; spy on your activity and make premium rate phone calls. The virus can even install other malicious apps without your permission or knowledge, turning your phone into a hacker’s dream.

When an infected phone connects to a public WiFi network, the screen freezes for a brief period of time. During this period, the trojan attempts to spread to other Android phones also using the network. The virus can also be sent via Bluetooth, making an infected phone dangerous to be around, physically.

So far, the virus’s reach has been limited, but security experts at Kaspersky remain highly concerned about the aggressive nature by which it is capable of spreading. To make sure you stay protected, you’ll want to make sure your Android phone has anti-virus software, and further make sure that it stays up to date. Be sure to check out Techlicious’s Computer Security Software Buying Guide 2013 for some great, free options for keeping your Android phone safe.

I would like to speak with you in to regards with this if you have any time too…. I have had an awful time with this or something similar with no control over my compters or phone. I know its there and has been on every computer phone, tablet ive had over the last year (that I have noticed) It has advanced from this somehow though as I can tell when it happens after a rebuild, factory reset or turning on from new the screen flickers and everything changes and within mins my computer is no longer my own - taking away my access to most things - either greyed out or just not there as an option altogether. I have seen an awful lot of andoid on a windows system when I havent plugged a phone in there and my bios is locked…. I cannot explain how this feel so suffocating and scary… no money has been stolen so I think its personal as it so persistent too persistent. My family and friends think im paranoid / mental and thats very uncomforting when you have nowhere to turn - the police think the same im sure I would have to be murdered before they investigate….... I could go on and on about this problem and how and what is infected (everything) it even seems to syncronise with any anti virus - which is useless in this scenaro anyhow.
I have had 5 laptops, 4 phones and 3 tablets - I have broken them all trying to get this off by myself. It just seems to me I wont ever get rid of it until this stalker decides he doesnt want to watch me anymore. That is sould destroying and completely and utterly frustrating. I am a strong character and have kept fighting but its almost beat me!

Will you send me more details

I have to be honest with you. From what you’re describing, it doesn’t sound possible for a hacker to be doing all of that.  Perhaps, you’re seeing something that is normal for Windows and interpreting it incorrectly.

But I’ll be happy to take a look and give you my opinion. Why don’t you send me a screenshot of your computer where you think something odd is happening and/or give me specific details of EXACTLY what you’re seeing.

You can post the details here or send the screenshot to josh at techlicious dot com.