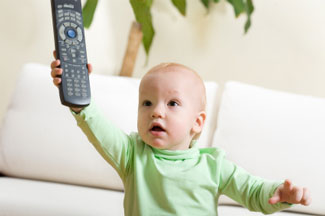 A new warning to those of you with a small child running around the house: Your television is more dangerous than you think. A new study in the journal Pediatrics shows that falling TVs are a growing source of injury amongst children, especially those under the age of 5.

The statistics are somewhat ugly. Between 1990 and 2011, there have been 380,000 children treated in emergency rooms due to television-related injuries. That amounts to one child every 30 seconds.

According to lead study researcher Dr. Gary Smith, it can be very easy to overlook a new, unsecured television as a potential source of injury for children. “I’m a pediatric emergency room physician and when I see injuries occur, the reaction usually is, ‘I had no idea that this could happen to my child.’”

Television-related injuries are fairly easy to avoid. Securely mounting a television on a wall is the best approach, and ugly wires no longer need to be an issue. The Huffington Post recommends “safety anchors or anti-tip devices,” and further advises against putting items a child may want to reach for on top of a television.

If you’re interested in the technical details of the study, they're available on the Pediatrics website. For more about how to make your entertainment area safer for toddlers, check out our guide to baby-proofing your home theater.