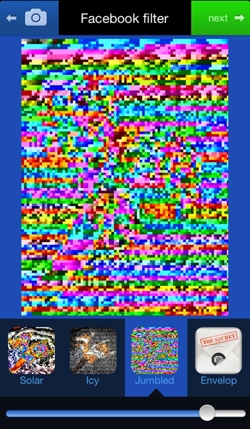 My friends and I are addicted to Snapchat. For those who are unfamiliar, the iPhone app allows you to send your friends a picture that can only be viewed for 3 to 10 seconds before it’s deleted from your phone. It’s a way to share photos that we’d rather not create a permanent record of.

The new app Secret.li takes the concept of self-destructing photos and applies it to social network Facebook. Pictures posted to the social network by the program are automatically deleted after a period of time you set, and only people with your permission (and the Secret.li app) can view them.

See, the app posts all your pictures publicly, but scrambles them using a “safety filter” as if they were part of an old-school X-rated cable channel. The app has a slider to let you choose just how scrambled you want your picture to appear to those without the app. You can also choose to completely hide your shot inside a virtual envelope.

For Secret.li to work, you’ll need to get all your friends to download the app as well – or at least the ones you want to be able to see your self-destructing pictures. Of course, you could just adjust your Facebook privacy settings to determine who can see your photos on the site. But where's the undercover spy flair in that?

Secret.Li is available for download for iOS devices via iTunes.