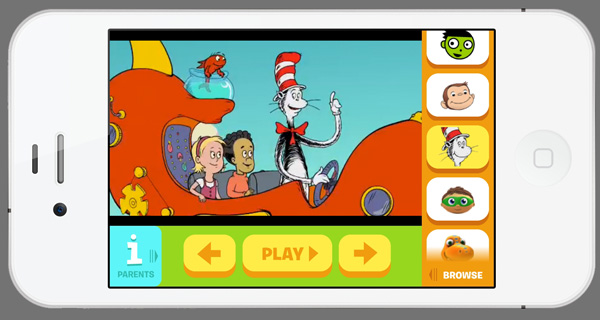 Just in time for the holidays, when assorted iDevices appear under the tree and there's plenty of need to entertain kids during travel, PBS Kids has released a new app for the iPhone and iPod touch. The app offers free streaming to more than 2,000 videos, from series such as "Sesame Street," "Curious George" and "Dinosaur Train."

Unfortunately, most of the videos are clips and not full shows. Users should also note that they'll need a WiFi or 3G wireless connection to access the videos.

PBS's earlier version of the video app was available for the iPad only, but still was a huge hit, downloaded more than 450,000 times and streamed more than 430 million videos – an average of 2 million a day. The iPhone-touch version of the app now on iTunes expands the mobile viewing audience and gives parents information about the educational benefits and content of each show, as well as providing local PBS station TV schedules.

The easy-to-navigate app also supplies tools for buying downloadable episodes from iTunes and sharing of PBS videos through e-mail, Facebook and Twitter. What's more, PBS KIDS Video App connects users to the PBS Kids' suite of apps, a handful of educational and fun diversions. Only a total Scrooge could find something not to like in this app.