When the first true wireless earbuds with active noise-canceling (ANC) came to market in 2018, they were chunky and heavy, weighing over 7 ounces per bud. 1More manages to pack the same functionality into earbuds about half the size and weight of the first generation, with the ComfoBuds Mini ($99.99), making them the world's smallest ANC true wireless earbuds. At just 3.7-ounces per bud and measuring 0.67 × 0.59 × 0.12 inches, the ComfoBuds Mini virtually disappear when you place them in your ears, and they feel almost weightless compared to other earbuds. 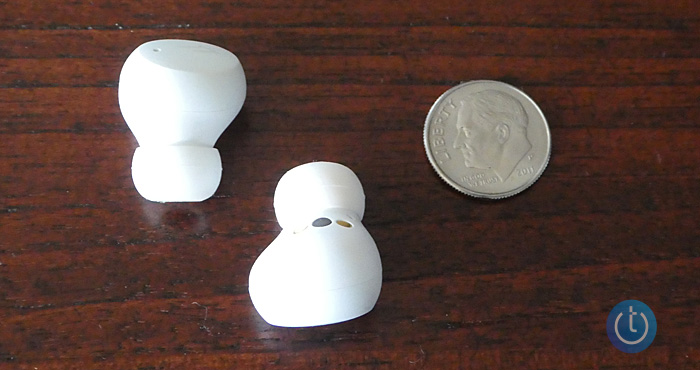 Unfortunately, their small size impacts their ability to produce rich sound, and call quality is dismal. So, the ComfoBuds Mini don't unseat our top picks for the best under $100 true wireless earbuds, the JBL TUNE230NC and Soundcore Life P3. However, the ComfoBuds Mini are significantly smaller and the ANC works well. After two months of testing, I find myself grabbing the ComfoBuds Mini when I want discreet and comfortable true wireless noise-canceling earbuds for casual, on-the-go listening.

In keeping with the ComfoBuds Mini's small size, the case is on the small side at 2.22 × 1.97 × 0.96 inches, and its oval shape makes it easy to slip into a pocket. Like the Lenovo Smart Wireless Earbuds, the ComfoBuds Mini comes with a USB-C cable for charging and three additional ear tips, which is unusual at this price point.

When I first plucked the ComfoBuds Mini earbuds from their case, they felt so small I was afraid of dropping them. However, the driver enclosure is offset from the eartip and is easy to grip. The styling is elegantly minimalist.

The ComboBuds Mini are IPX5 rated, making them sweatproof and able to withstand splashing water, but they should not be submerged.

Setting up the 1More ComfoBuds Mini

When you open the case, the ComfoBuds Mini flash white, signifying they're in pairing mode. To pair with your device, open Bluetooth settings, and you should see the earbuds available for pairing. To pair to another device, you hold the button on the side of the case for three seconds, and the earbuds will re-enter pairing mode. Unfortunately, the ComfoBuds Mini do not support multi-point pairing.

After pairing the earbuds, you'll want to download the 1More Music app. In the app, you can customize the listening modes and earbud controls, and take a test to create a custom sound profile, called SoundID.

I wasn't impressed by SoundID. Yes, you can hear the difference when you toggle it on and off in the app, but in actual listening it was hard to tell it was on.

There are three listening modes: ANC, Transparent, and Off. For most headphones, you just get those three choices, but 1More goes beyond and, for the ANC mode, you can choose between Strong, Mild, and WNR (wind noise reduction). Strong provides the most ANC, Mild provides less noise canceling for somewhat quieter environments, and WNR focuses on reducing the frequencies due to wind noise (more on how well these modes work below). When selecting an ANC profile in the app, that selection will remain when you switch between modes with the on-earbud controls.

In the app, you can customize the on-earbud controls. You can assign double tap and triple tap to Play/Pause, Previous/Next Track, Volume up/down, or Voice Control. You can also designate what happens when you take the earbuds out of your ears and put them back in with Smart Playback. Your options are Auto-Pause Only, Auto-Pause & Play, or No Smart Playback.

You can use the earbuds together and either earbud individually.

The ComfoBuds Mini case is easy to open, and the earbuds come out with little effort once you know the trick to extracting them. Since you can’t get a two-finger grip when the earbud is seated in the case, you have to start by using one finger to pull the top of the earbud toward you; then, you can easily puck it out of the case. Magnets inside the case guide the earbuds in place and ensure they are correctly seated for charging.

Getting the earbuds to fit correctly and achieve a good seal is easy, thanks to the included four eartips. The earbuds sit snuggly in your ear and feel secure when biking and walking. I experience minimal ear fatigue even after hours of listening.

The capacitive-touch on-earbud controls are very responsive without being overly sensitive – even when exercising. Out of the box, you can double tap to play/pause, triple tap for previous/next track, and press for 1.5 seconds to change listening modes.

Disappointingly, there is no multi-point pairing. However, multi-point is not an expected feature at this price point.

The music I used for testing was downloaded to my iPhone 11 Pro in lossless CD quality and streamed through the Apple Music app. I compared the ComfoBuds Mini to our current sub-$100 picks, the JBL TUNE230NC ($99.95) and Soundcore Life P3 ($79.99), as well as more expensive models, including the Jabra Elite 85t ($229, on sale for $199) and SoundCore Liberty 3 Pro ($169, on sale for $129.99). I also tested call quality against these models from indoor locations and on busy New York City streets. 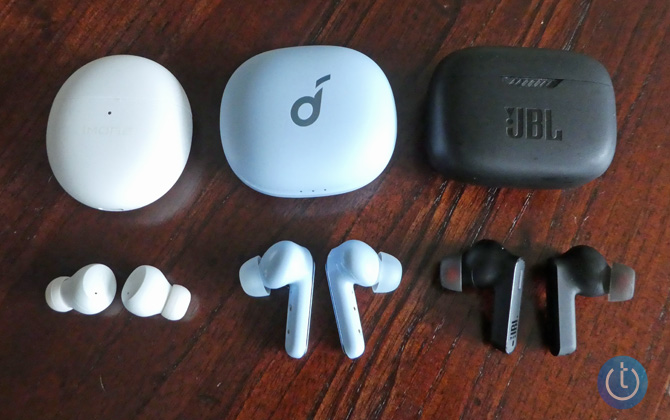 From the left, the 1More ComfoBuds Mini, Soundcore Life P3, and the JBL TUNE230NC

With ANC turned off, the ComfoBuds Mini have a pleasing sound with prominent mids and highs, but little bass and a small sound stage. However, when you turn on ANC, the bass appears with some richness and the sound stage becomes more extensive, but not enveloping. I like the more bass-forward Strong ANC profile. If you want just a minor bass enhancement, stick with the Mild profile. I found the WNR (wind noise reduction) profile bass to be boomy. Even with ANC turned on, the ComfoBuds Mini can't quite compete with the JBL TUNE230NC, which produces a fuller, more immersive sound that is balanced across frequencies. The Soundcore Life P3 earbuds also slightly outperform the ComfoBuds Mini with an overall more uniform and pleasing sound.

One major quibble with the ComfoBuds, the earbuds default to ANC off every time you take them out of the case. So if you're like me and prefer the richer, more immersive sound you can achieve with ANC, you'll be stuck turning ANC on every time.

The ANC does an admirable job of reducing environmental sound, whether it's fan noise, train noise, or the whoosh of air that’s audible through my open window on the 21st floor. The ANC Strong provides the best ANC and enhances the sound quality the most. The Mild is good for less noisy environments, but you don't get as much of a bass boost, which is a good reason to stick with Strong. Unfortunately, WNR (wind noise reduction) doesn't help with wind noise, and it doesn't enhance the audio as much as the Strong profile.

Call quality was good on my end, but people on the other side had a hard time hearing and understanding me; my voice sounded very muffled with and without ANC turned on.

The ComfoBuds Mini get a respectable maximum of five hours of play time with ANC turned on and up to six hours with ANC turned off, considering the tiny size of the earbuds. They also gain 1.5 hours of play time with just 10 minutes of charging. The case provides an extra three charges for 20 to 24 hours of listening. An LED on the outside of the case shows level of charge with a green, yellow, or red light, and will flash red if the case battery is too low to charge the earbuds. You can charge the case with any USB-C cable or pop it on a wireless Qi charger. 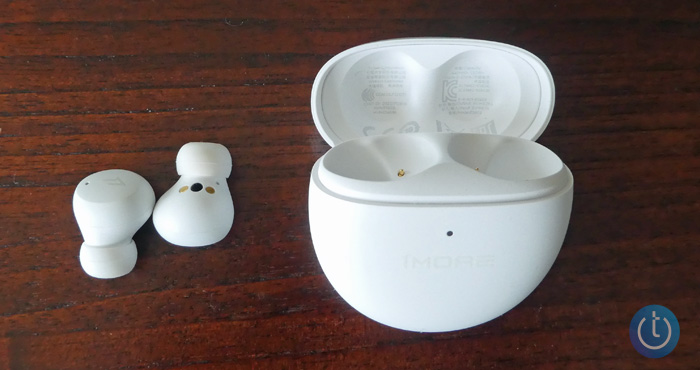 You'll be pulled in by the 1More ComfoBud Mini's elegant, barely-there design, and enjoy them for their comfortable, lightweight fit. They don't deliver the best sound – I still prefer the JBL TUNE230NC – but the music quality is good enough for casual listening and the noise-canceling works well, though call quality is a weak point. However, if size is a critical factor for you – and these really are very tiny and light  – the ComfoBuds Mini are the best choice for ANC true wireless earbuds on a budget.