Review of the HTC One S (T-Mobile)

by Josh Kirschner on May 01, 2012
in Phones and Mobile, Cell Phones, Guides & Reviews

It's not easy standing out in the crowd of Android phones. LG, Samsung and HTC are all making terrific phones (along with their share of clunkers). But the new HTC One S for T-Mobile manages to differentiate itself from the Android competition both in its design and features. And while T-Mobile may not have the iPhone, I would gladly take the One S over an iPhone 4S. Since I will no doubt spark some disagreement with this last statement, read on to learn why. 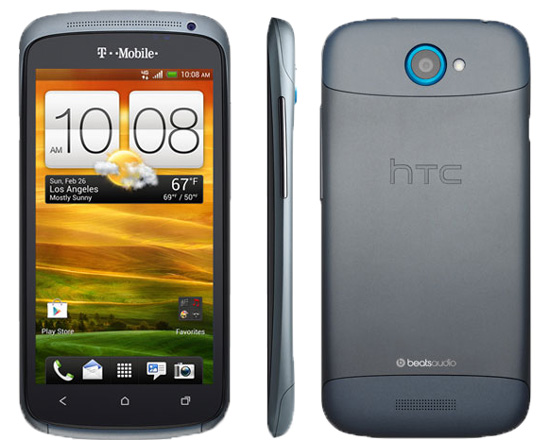 The HTC One S is a perfect balance of size and comfort. Even though it sports a 4.3-inch display, the One S is the thinnest phone ever from HTC at only .31". That puts it just shy of the Motorola Droid Razr (Verizon) at .28". But the One S is far more comfortable to hold thanks to its better balance and narrower profile.

The One S also stands out with its medium-grey anodized aluminum case that is both very attractive and easy to grip. Over time, I expect the aluminum to hold up better than the plastic on many other Android phones, as well as the all-too-fragile glass back on the iPhone 4S.

And now that I've mentioned the iPhone, let me also point out that though the iPhone has a much smaller 3.5-inch display, it is thicker (.37") and considerably heavier (4.9 ounces for the iPhone vs 4.3 ounces for the One S). Though if you have small hands, reaching across the display for typing and navigation will be easier on the iPhone.

Buttons on the One S felt solid. The volume rocker is well placed for easy access, though the relatively flush top-mounted power button requires more effort to find.

The HTC One S has a beautiful 4.3-inch qHD (960x540) Super AMOLED display. Colors pop (sometimes a little too much), there's plenty of brightness and contrast is excellent. The display resolution is a step down from the HD displays on the flagship devices from its competitors (and its big brother the HTC One X), but it's still quite good. The One S uses Gorilla Glass to protect against scratches and breakage.

The iPhone resolution of 960x640 nudges out slightly the One S, as does its pixel density (326ppi vs 256ppi). However, for watching movies, viewing photos or browsing the web, the larger display on the One S is definitely the better experience. And I found the One S performed slightly better in direct sunlight.

Call quality on the HTC One S was very good, and the speakerphone was loud and clear. HTC touts its Beats Audio technology for providing significantly better music sound quality through your headphones. I found that it provides a slightly better musical experience, which was very good, overall.

The One S runs on T-Mobile's 42Mbps HSPA+ network. My experience in New York City resulted in download speeds between 5mbps and 14Mbps, with typical speeds in the 7Mbps range. That's fast, but not a match for the "true 4G" LTE networks on AT&T and Verizon, which regularly deliver speeds north of 20Mbps in my testing.

Like pretty much every Android phone, the HTC One S can act as a mobile hotspot for other devices.

Almost every phone we test comes with a marketing sheet touting the quality of its camera. Very few live up to that promise. Let me just say that the HTC One S has the best camera I've used on any Android phone, and I would argue it outclasses the iPhone 4S as the best in the US market.

When I first saw the HTC One at a press event, it was clear that someone at HTC asked the question, "What can we add to the camera to actually make it more useful, not just more complicated?"

All phones have scene modes, but those on the One S really work. The HDR mode, especially, delivered incredible results in low light (better than the low light mode, in fact). Shots that came out as dark blobs on other phones, were more than acceptable on the One S, delivering well exposed subjects and accurate colors. HDR doesn't work well for moving subjects—you'll end up with odd double-exposure artifacts—but for still subjects, it can be nothing short of miraculous. The HTC One S "Group portrait" mode also worked as advertised to reduce closed eyes and frowning in group shots.

In addition to the scene modes, the One S has numerous Instagram-like effects for adding a little artistry to your shots.

Given the fine quality of the camera, it should be no surprise that the quality of the 1080p video was excellent, as well. And it was, possibly the best on any smartphone I've tested. The one bug I found was that using the anti-shake mode caused the video to stutter (see video below). The One S also includes a slow motion video—my kids had a blast with it and it came in handy for filming my son's baseball swing to help him improve his technique.

The HTC One S runs Android 4.0.3 Ice Cream Sandwich with HTC's Sense 4 skin. Those new to Ice Cream Sandwich and Sense 4 will appreciate the improvements, such as the ability to see mini-icons of apps in folders and unlock the phone with face detection. Engadget has a full review of HTC Sense 4 for those that want to dive into the details.

The 1.5 GHz dual core processor and 1GB of RAM had no problems handling navigation without lag.

The One S comes with 16GB of onboard memory, but no microSD card slot. HTC makes up for this omission with 25GB of free Dropbox storage when you purchase a One S. For many users, the Dropbox storage will be much more useful than the SD card. You can set the One S to automatically upload photos you take to Dropbox, and those photos can be synced to your personal computers.

The HTC One S battery life is superb. The 1650mAh battery easily lasted me through the day and well into the next under normal usage.

The HTC One S is available from T-Mobile

The HTC One S is the best Android phone on the market and, in my opinion, easily beats out the iPhone 4S as well. It has excellent ergonomics, a terrific camera, a big, bright display and long battery life. Yes, it could have an HD display, instead of a qHD. But when compared side-by-side with the HD display of its big brother the One X, the One S is every bit as clear.

The one drawback that matters is the lack of an LTE network on T-Mobile. The HSPA+ 42 network is far from slow, yet still delivered less than half the speed, on average, of the AT&T and Verizon LTE networks. In practice, that meant web pages loaded a hair slower. If you're into streaming video, though, those speed difference will make a difference.

If there is no replaceable battery and no SD card, what happens if your battery fails, you can not replace it…and where do you store your photos, music and videos if there is no SD card?

If the battery fails, you

If the battery fails, you would need to get the phone serviced. That is a limitation, though battery failures are pretty rare and would likely occur during the initial warranty period.

The phone has 16GB (about 12GB available) of internal storage for photos and videos. The phone also comes with 25GB of free Dropbox storage for two years, which should be plenty of space to store extra videos, etc. and makes it much easier for you to share/sync that content among multiple devices.

I got mine in May & I love it!! I can’t think of anything you can’t do on it & the camera is amazing!! I have friends with I phones that love my One S better than their I phone & are considering getting one.

Can I transfer my data from a Sensation 4G?

I was offered this phone a a free replacement for a problematic Sensation 4G (T-mobile).  How will it receive the transfer of everything from my half-full 16g SD card? What will be the problems with this? Please provide as much detail as you can, I’m not fully savvy and really appreciate your website and the service you give to average users. I do run a small biz on my phone, use it everywhere for everything and have about 80 apps.  Thanks in advance!

Your current data can be transferred to your new phone. The process will vary somewhat depending on what types of data you need to transfer (files, contacts, email, etc.) and who you providers are for those services. The easiest thing for you to do is take it into your local T-Mobile store and ask them to do it for you. They’re should be willing to do that for existing customers.

If you want to do it yourself, write back and let me know what it is you need to transfer, and I will give you some more specific tips.

I need to transfer everything! I use everything, have a half full 16gig sd card. When my prev.phone was stolen (LG g2x) and I went with the HTC sensation 4g, I signed up for Tmobile’s photo and contacts service. So I’m pretty sure that will restore. But do I manually have to list my apps & reinstall? What else would be on the sd that would be unique to it? My PDF files on adobe reader app are in their storage, right?, and will reappear when I log into adobe and reinstall?  T-Mobile must have a transfer process. Thank you, would love to hear more tips and tricks.
Contacts, photos, gmail, apps, bookmarks, swype dictionary, non-PDF downloads (I have a lot of downloads). Also, does this HTC one s hook up so nicely with all my android/google accounts? I like HTC, just nervous when I heard no sd card.
Thanks again!

I no longer have this

I no longer have this phone, but I do believe T Mobile will replace a failed battery in those phones where you cannot remove it yourself. I now have a Galaxy Note 5 which is the same situation, & I would take it to the store and I’m sure they would replace it free if it failed.