If you’ve had your YouTube access blocked in a country that is preventing free speech, by your employer or school out of a desire to enforce productivity, or you want to view content that YouTube isn’t making available in your country for legal or content licensing reasons, you’re not alone. According to a recent study by NordVPN, when they analyzed Google search terms containing the keyword “unblock" from December 2020 through January 2021, they found that the phrase ''unblock YouTube'' now represents 78.7% of all searches. And with more than two dozen countries blocking YouTube at various points, this is not an issue that is going away. 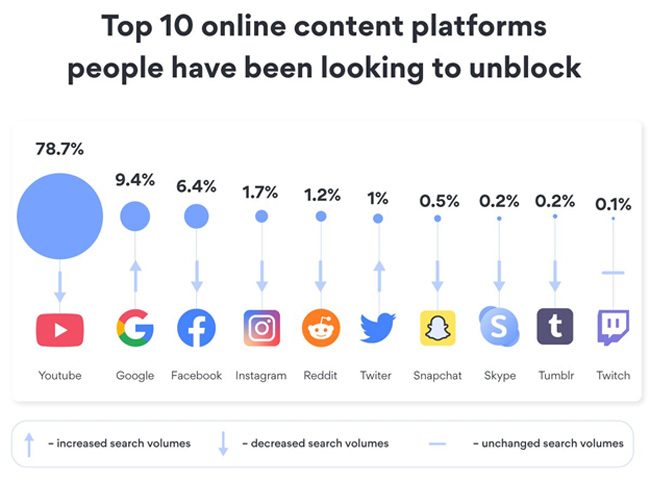 The easiest way to get around YouTube blocking is to use a VPN that allows you to hide what sites you are visiting from anyone monitoring your internet traffic. When you connect through a VPN, your computer creates an encrypted connection to the VPN sever, and the VPN network makes the connection to external sites, like YouTube. Anyone monitoring the network will only see that you are connected to the VPN, but not what traffic is being sent back and forth or what sites you are visiting, allowing you to bypass government or employer censorship.

If your YouTube content is blocked because of distribution limitations in your country or region, many VPNs offer servers around the globe, so you can connect through one in a country where the content you are searching for is not prohibited.

When choosing a VPN, privacy, performance and reputation should be your top priorities, and you should be willing to pay a small monthly fee to get them. There are plenty of free or cheap VPNs out there, but there is no guarantee that they will protect your privacy, as many have been found to leak information in the past. And for YouTube, you need the bandwidth necessary to stream video without constant pauses and stuttering. The better VPNs also offer more server locations to access content only available in specific areas.

My two recommendations for a VPN are NordVPN and ProtonVPN. Both are highly-rated by numerous testers and have an obsessive focus on privacy. You’ll also get dozens of server options around the globe and plenty of bandwidth for video streaming. Both will run you around $4 a month for their basic plans, which should be fine for most people. ProtonVPN also has a free option, though with limited severs and bandwidth, which doesn't make it ideal for YouTube streaming.

One issue with VPNs is that some of the same countries that block YouTube also block VPNs. If that’s the case where you live, you may need to do some research to find out which VPNs aren’t being blocked where you live and what the legal ramifications may be to using one. Keep in mind that reputation becomes even more important in these instances; you don’t want to use the one sketchy VPN that is available in your country that's there because it's the one that the government is secretly monitoring. Look for reviews from well-known, professional sites before selecting any VPN.

If you don’t want to pay for a VPN or can’t find a reputable one that works in your country, using a TOR browser is another way to access blocked YouTube content. TOR uses a special version of the Firefox browser to connect to a global network of “nodes” managed by universities, companies, individuals and governments. All traffic is encrypted and anonymized as it moves through the nodes, hiding your activity and the sites you visit from prying eyes.

There are, however, a few significant limitations to TOR that make it less ideal for YouTube. Unlike VPNs, TOR gives you little control on where the TOR “exit node” that connects to YouTube is located, so you may end up connecting through another country where content is also limited. TOR also can have significant bandwidth limitations, making video streaming spotty. And countries that block VPNs often have similar blocks in place for TOR. So while TOR can be a backup option for unblocking YouTube, a VPN is the way to go.

Josh Kirschner is the co-founder of Techlicious and has been covering consumer tech for more than a decade. Before founding Techlicious, he was the Chief Marketing Officer for Inform Technologies, a provider of semantic technology to media companies. Josh started his first company while still in college, a consumer electronics retailer serving the student market.

i have a scince video

my rteachers wont unblock it

Mad and sad are the

Mad and sad are the same feeling,

my teacher’s unblocked it for a while, then some dumb guy hijacked the smart board so that the class could watch funny school memes

i found rtwab.com is youtube but everything else is blocked because of my dumb administator.

My mom locked and i

Talk to your mom.

mine is fucking blocked

mine is freaking blocked

mine is freaking blocked

i wanna watch youtube at recess but its blocked

ITS BLOCKED THEY FORGOT ABT A THING CALLED RECESS CANT THEY JUST BLOCK CERTAIN VIDEOS NOT
A L L VIDEOS???