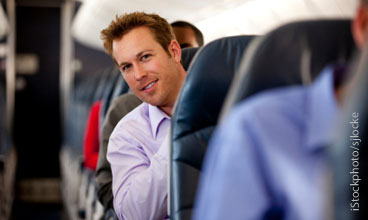 Ladies and gentlemen, our plane is about ready for take off. Our captain would like to ask that you put your tray table in the upright position, make sure your personal belongings are safely stowed under the seat in front of you. Oh, and go ahead and whip out your iPad and start surfing the Internet – today, after much waiting, the Federal Aviation Administration has officially ruled that portable electronic devices such as smartphones are now safe for limited use during takeoffs and landing.

The feds spell out the new rules pretty clearly in today’s press announcement. “Passengers will eventually be able to read e-books, play games, and watch videos on their devices during all phases of flight, with very limited exceptions. Electronic items, books and magazines, must be held or put in the seat back pocket during the actual takeoff and landing roll. Cell phones should be in airplane mode or with cellular service disabled—i.e., no signal bars displayed—and cannot be used for voice communications based on FCC regulations that prohibit any airborne calls using cell phones. If your air carrier provides Wi-Fi service during flight, you may use those services. You can also continue to use short-range Bluetooth accessories, like wireless keyboards.”

Previously, passengers were required to comply with an archaic set of rules that required turning off all devices for takeoff. These regulations were designed before most of us were even born out of concern that a CB radio could take down an airliner. Of course, modern devices are pretty safe – planes don’t fall out of the sky because someone turned on an iPod touch at the wrong time.

Already, airlines are taking the FAA’s guidance to heart. Georgia-based airline Delta announced today that it would be allowing the use of portable electronic devices during the taxi, takeoff and descent of domestic flights beginning November 1. Other airlines will no doubt be following suit shortly as soon as flight crews can be briefed on the new regulations.

Today’s announcement is pretty good news for those of us getting ready to fly this upcoming holiday season. It may cause a little bit of heartache over at Virgin American airlines, because its edgy new pre-flight safety video (below) will have to be reshot for the new rules.