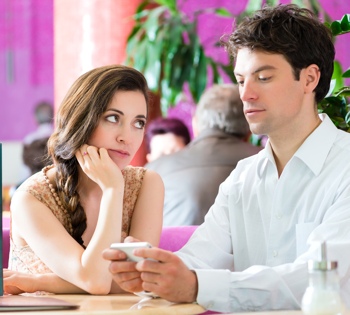 Smartphones, in the few short years they’ve been around, have become absolutely indispensible tools for a large group of Americans. If you need proof, look no further than this fact: A newly released Mashable/Statista poll shows that more people would rather give up sex than give up their smartphones.

The poll, conducted of 2,210 U.S. adults by Harris Interactive, asked respondents what they’d be unable to live without. Twenty-six percent said they simply couldn’t live without their smartphone. Only 20% said the same about sex.

Smartphones aren’t the only piece of tech we’d give up sex for. According to the study, 28% of Americans cannot bear to part with their Internet, 24% can’t live without their computer and 23% would not be able to find the strength to go on in a world without television.

Sex still beats Facebook, though. Just 7% of us say we can’t live without social networking in our lives.

[Couple on date with smartphone via Shutterstock]

OMG, in what world do

OMG, in what world do I live in. Smartphone more important???? Never… Sigh…