The words "cheap" and iPhone" rarely appear in the same sentence, but that's the best way to describe its new $399 Apple iPhone SE. Like the first generation iPhone SE (which starting shipping in March 2016 for $399), the new iPhone SE is built on an older, smaller model —  the 4.7-inch iPhone 8 (which debuted in September 2017) — but souped up with a much better processor and wireless connectivity.

Like the iPhone 8, the SE starts with a 4.7-inch LCD Retina HD display, and includes iPhone 8's physical Home/fingerprint sensor button rather than the all-glass front found on the iPhone X and 11 series. Plus, the SE gets a significant boost over the iPhone 8 with the inclusion of Apple's current top-of-the-line A13 Bionic chip found in the iPhone 11 and 11 Pro. You'll also get faster wireless connectivity – gigabit LTE and the new Wi-Fi 6 standard, and the new eye- and battery-saving Dark Mode.

While SE's physical camera specs are the same as the iPhone 8 – 12MP f/1.8 camera on the rear and 7MP f/2.2 front Facetime lens – the A13 chip enables iPhone 11-like functions: HDR, Portrait mode on both rear and front, all six Portrait Lighting effects, Depth Control, and full editing features. You'll also be able to quickly shoot video without switching out of Photo mode. SE also includes 4K video recording up to 60 frames per second, just like the iPhone 8, and the same 1080p recording from the front camera.

Battery life on the SE also is identical to iPhone 8 – 13 hours of video playback, 8 hours of streaming video, 40 hours of music, plus quick charging that fills the phone 50 percent in just 30 minutes with an option 18W or higher charging block. Wireless Qi charging also is included.

On the bottom perimeter are the same twin stereo speakers found on the latest iPhones, bracketing the Lightning jack. Physically, the SE is the identical size and weight as the iPhone 8 – 5.45 x 2.65 x .29 inches, about 75 percent the size of the iPhone 11, and 5.22 ounces, which means you can now re-use any of your old iPhone 8 cases. SE is also IP67 waterproof-rated – it can be safely submerged for 30 minutes in three feet of water. 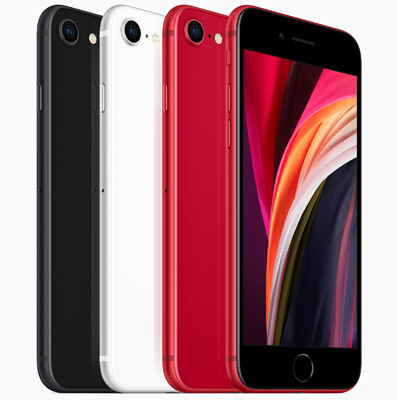 iPhone SE will go on pre-sale this Friday, April 17, in black, white and (PRODUCT)RED — and will be available for pre-order beginning Friday, April 17, at 5am PDT starting at $399 for the 64GB version, and will be available to ship a week later, on April 24. For those on a budget, you can buy the SE in installments for $9.54 a month or $229 with a trade-in. SE also will be available in 128 and 256GB editions, presumably at $499 and $599 respectively, although Apple didn't say. The purchase of an iPhone SE also gets you a free year of Apple's Apple TV+ streaming service.