11 New Features that Will Make Your Apple Devices More Useful

Enhanced security and privacy, increased interoperability between Apple devices, and more intelligent apps are coming to all Apple devices this fall. Many of these new features and capabilities will work across iOS 15, iPadOS 15, watchOS 8, and macOS Monterey (macOS 12) when the new operating systems roll out this fall. Here are our 11 favorite new features.

1. FaceTime video calls get scheduling, interoperability with Android and Windows, and more

In a challenge to Zoom and other web conferencing services, you'll be able to create and share links for pre-planned group FaceTime video calls. These calls can now include Windows and Android users, who can access scheduled FaceTime calls via their web browser.

The FaceTime app itself is also receiving upgrades. You’ll be able to block out ambient sound with Microphone Voice Isolation or capture more of your environment with Wide Spectrum. Portrait mode will let you blur out your background. And, you'll be able to share music- and video-watching experiences via Share Play with compatible streaming apps, including Disney+, Hulu, HBOMax, Twitch, TikTok, PlutoTV, Paramount+, ESPN, and even Zillow for group house or apartment hunting.

Universal Control is a new feature that lets you instantly move and sync content wirelessly across up to three Apple devices as long as they are nearby. And, you can control all three devices with one device via its keyboard and/or trackpad. So, you can drag and drop text, images, and other content from one device to another.

3. Turns words in images into text

Live Text recognizes words in images and turns them into text that you can edit, translate, and share. For instance, if you took a picture of a slide at a meeting or notes you wrote by hand, you wouldn't have to transcribe them. You'll also be able to identify objects in a photo, such as a dog breed or flower type.

4. Add your ID and keys to the Wallet app

Apple is expanding the function of the Wallet app to include IDs, such as your driver's license or a TSA ID. You'll also be able to add e-keys to smart locks and cars. 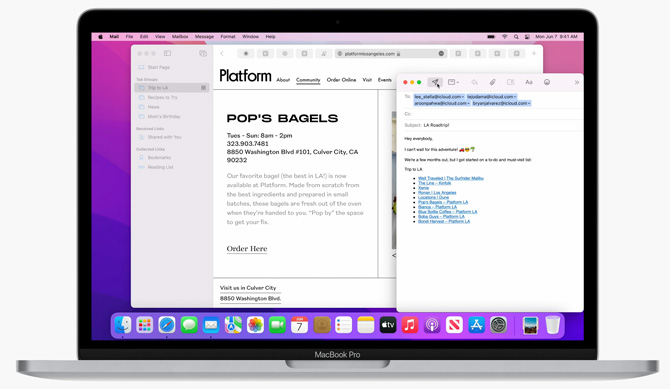 A new Safari feature called Tab Groups lets you bring organization to your browsing. For instance, if you’re researching places to eat in Los Angeles and have a number of relevant tabs open, you’ll now be able to group those tabs together. You can share these Tab Groups with others, and the Tab Groups will sync in Safari with all of your Apple devices.

To assuage (mostly unfounded) fears that Apple is listening in on your Siri queries, all Siri operational commands will be processed locally. So if you use Siri to open an app or play music, that processing will stay on your phone. If you’re looking for information that requires internet access, though, Siri requests will still be sent to the cloud.

7. Less of your information will be shared via Safari and Mail

Apple took significant steps in protecting privacy with the app tracking permissions added to iOS 14.5. With the arrival of iOS 15, iPadOS 15, and macOS 12 Monterey, Safari and Mail will mask your IP address and location and prevent marketers from tracking your online activities after you open their emails.

iCloud+, Apple’s paid storage service, will receive a few useful upgrades at no cost beyond your usual $0.99-$9.99 subscription fee this fall. Private Relay for Safari will hide your IP address and encrypt all of your web surfing to the site you’re browsing, like a VPN. The new Hide My Email feature will hide your true email address when filling out forms online. Like with Sign in with Apple, the Hide My Email feature for filling out online forms will create a unique, random email address for the form and forward any emails sent to your regular email address. Apple has also enhanced and expanded HomeKit Secure Video within iCloud+. Video footage will now be encrypted before it is uploaded and stored in iCloud for full end-to-end encryption.

9. Find out which apps are tracking you in the new Privacy Report

In Settings, you’ll have access to a Privacy Report that will list what apps are tracking you. The Privacy Report will also reveal the data that is collected, who the data is shared with, and how often the data is being shared. According to Apple, you'll be able to take appropriate action about individual app tracking behaviors from within the Privacy Report.

To make notifications less intrusive, the new Focus function will intelligently rank the importance of alerts and group alerts together. Focus also enhances Do Not Disturb, letting people who text you know that you have Do Not Disturb turned on and informing them about how to reach you in case of an emergency.

If you passed away, would someone be able to access your iCloud data. With the new Legacy feature, you’ll be able to designate a next of kin who will gain access to your account upon your death.

Hi, can you please give advise on my recently purchased 4th gen iPad. It’s currently on 10-3-3 iOS. But l would like to upgrade further. As I’ve updated the software ( 10.3.3) it will not let the iOS update further. I have 25 gig space, so there’s no issue with space required.  Regards Bill.

We have an article that tells you what the latest iOS version each for every model of iPad. For 4th gen iPads, 10.3.3 is as high as they go.

I need some help because someone is trying to connect to my cell phone, calling them mentally dead