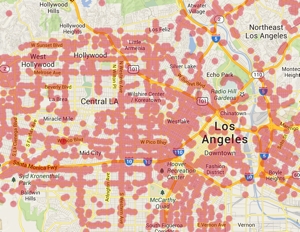 Forget your local coffee shop – the next great public WiFi hotspot may be located in your living room. Comcast just announced a controversial plan to turn its customers’ routers into public WiFi hotspots capable of connecting anyone with a valid credit card to the Internet.

The concept is quite grand: Comcast's 20 million customers’ home hotspots dramatically increase the range of the company’s existing public WiFi network in densely settled cities. A look at Comcast’s public WiFi map in Los Angeles shows most of the city already covered in red dots, putting 3.82 million Angelinos within walking distance of a hub.

Comcast customers can use any of these public WiFi networks for free as part of the monthly subscription. If you’re not a Comcast customer, you can buy an hour of WiFi service for $2.95 or an unlimited month for $19.95.

According to Comcast, strangers using public WiFi through your router will only cause “minimal impact” to your home Internet speed if any. And, your own private home WiFi network will remain inaccessible, since the public WiFi signal is separate from your home's wireless network signal. Of course, you can be forgiven if you have privacy concerns about strangers parking in your driveway to take advantage of a WiFi network originating from your living room. Thankfully, Comcast will offer the ability to disable offering public WiFi, though the service will be turned on by default.