Fake Geek Squad Subscription Emails Are on the Rise

This month, the latest flavor is fake Geek Squad subscription renewal notices (I’ve personally received six of these emails this month). The typical spin is that your subscription to Geek Squad is about to be automatically renewed at an exorbitant cost (in the $400 range) unless you call a number to have it canceled. It’s not clear exactly what the scam methodology is when you call (all of the numbers appear to have been deactivated when I tried them). But you will likely be tricked into buying fake services (Geek Squad or otherwise) or revealing your credit card information that the scammers will use to make purchases.

The scam emails I’ve seen all come from various Gmail addresses (an obvious clue that these are not actually from Best Buy) and have a variety of subject lines to catch your attention:

Inside, there is little text, just a JPG image of a fake Geek Squad invoice (another clear scam flag) with the supposed fee you will be charged and the number to cancel. The similarity between the images I received suggest that all of the emails are coming from the same scammer or group of scammers. Many of the phone numbers are also tied to the same Hawaii-based phone provider. Here is one sample of the invoice: 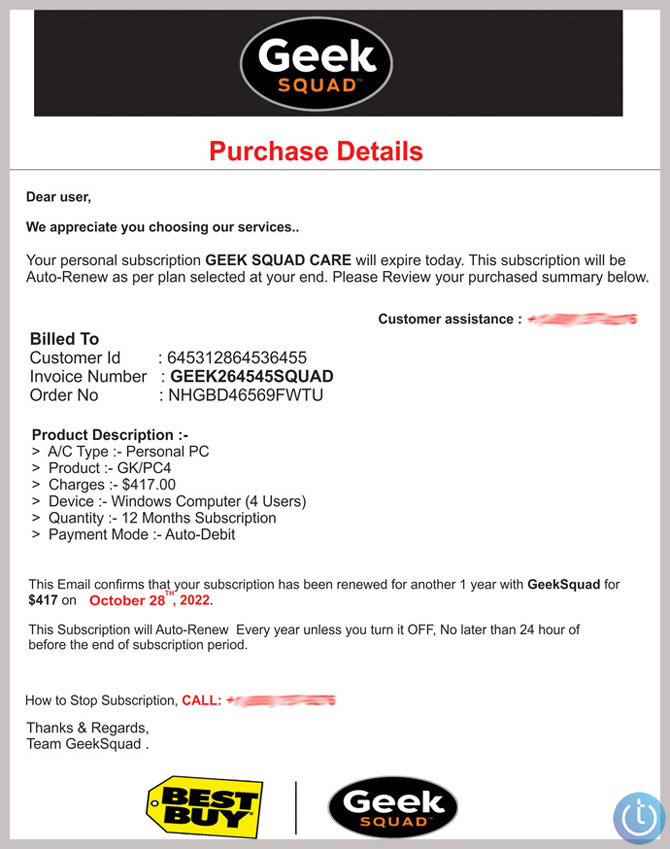 In the realm of email scams, this one is pretty easy to spot. Unfortunately, it may not be easy for everyone, which is why these scams continue to flourish. If you get an email claiming to be from Geek Squad or anyone else (I’ve seen numerous similar scams for fake antivirus renewals from Norton and others), don’t just call the number or follow a link in the email. It’s always far safer to search for the company website and contact information directly on Google.

Josh Kirschner is the co-founder of Techlicious and has been covering consumer tech for more than a decade. Josh started his first company while still in college, a consumer electronics retailer focused on students. His writing has been featured in Today.com, NBC News and Time.

great article.
pls include in future articles the things to look for to determine if an email is probably a scam!
you’ve stated some in this article, but since they’re not bulleted or highlighted, could be difficult to find.

like - 1 or more of these indicates it’s spam/phishing:
1. sending email addr not related to the company
2. To: email addr not yours
3. your name not included anywhere in email or not the ways you spell/capitalize it
4. grammar and/or misspelling errors
5. images and not text
6. links to company’s website point to some other website

BE SAFE AND WARY!!

Hi Edward,Those are all good

Those are all good points. I cover some of those tips in the next article I wrote about a similar scam for fake Philo subscription renewals.