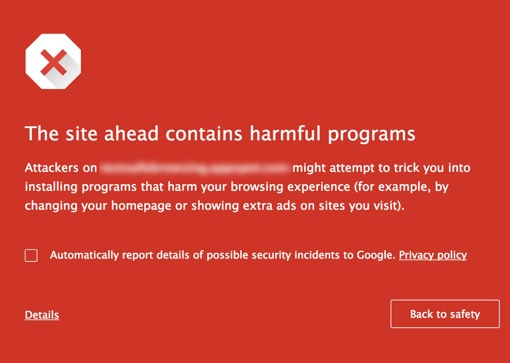 Has your web browsing experience been subject to a surprisingly high number of advertisements lately? If so, the problem may be that your computer is infected with an ad injector. Ad injectors are malware that – as the name suggests – inserts extra, unwanted ads into websites, making pages very difficult to navigate, see and use. Some even deliver ads explaining that a virus infection has been detected on your computer, hoping you won’t put two and two together to figure out that it’s the popup window itself that’s trying to hold your computer itself for ransom.

As an example, see this screen shot from Google. It shows what can occur when Adware is interfering with a standard Google search. Rather than getting the expected search results, you get ads disguised to look like Google links, along with image adsa and overlays—something you would never see in an uninfected search results page. 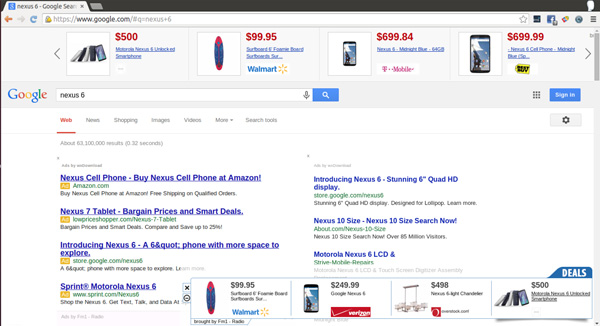 Not only are these programs annoying, they’re becoming a spreading problem. According to new research from the folks at Google, more than 5% of visitors to Google sites have at least one ad injector installed on their computer. Scarier still, half of that group has at least two injectors installed, and one third have at least four installed. Perhaps that should be no surprise though – once infected, many malware programs will attempt to install other bits of malware without your knowledge.

According to the study, the Adware scourge is affecting all operating systems (Mac and Windows) and browsers, So the the best way to keep your computer ad injector free is to, of course, own and maintain up-to-date anti-virus software. We have our recommendations for both Mac and PC.

Google is doing much on its end to fight ad injectors, too. The company announced that it has killed 192 deceptive extensions to its Chrome browser, and is using obtained data to better detect sketchy extensions in the future. Further, its Chrome browser is designed to automatically block some malware activity, and to block your access to sites that are hosting harmful programs such as ad injectors. (The competing Mozilla Firefox browser includes some solid security features to keep you safe from ad injectors too.)

Want to learn more about safe browsing? You can learn more about Google’s fight against ad injectors at the Google Online Security blog. You might also be interested in checking out these 6 ways to protect yourself from online threats.

So article doesnt even mention how to fight or remove adware. Written by a rookie who has no experience with adware and doesnt know how to even remove it. Anti virus of all things doesnt remove most of the adware because adware is claasified as pup- potentially unwanted program. Therefore in many cases goes even undetected by most crappy antivirus software and is detected but never automatically removed inly by few best ones. Im not sure what is the point of writing articles when you know nothing about subject. Just to fill content space???

Well, if you were to

Well, if you were to smart, you’d have already figured out how to remove the stuff, yet here you are searching articles like all the rest of us and want to harass its author.

Figure the adware problem out and post it on your personal blog then give us the link to it or shut your cheetoh-stained, overweight, smartaleck mouth, you jackass.

From the rest of us: thanks for the article.  I’ve downloaded the fix the other articles you referred to, which the angry neckbeard missed, and am removing the adware.

Gave no information that was helpful. Why do I care what Google is doing when they are part of the problem. What are solutions to adware? What programs are good at removing adware?

I go to Techlicious for help, not fluff…

Last week you had an article on how to opt out and a website to contact.  Well I did and there were some address I was told did not respond when the site ran my request.  Now I AM getting popups and adds even in this email address which I never had before.  I don’t believe you recommendation was helpful at all.

I was having a lot of trouble with extensions being installed without my knowledge or consent. Usually what tipped me off more often than not was that it would interfere with how Silverlight operated when watching streaming content. After repeatedly having to manually remove unwanted extensions over and over again I started blocking all cookies and java scripts. I also have a pop-up blocker and installed an Ad block. Now enable cookies and scripts as needed for the sites that I choose and it’s taken care of the problem.

As was mentioned in the article, Google has been making changes and now you can no longer install third party extensions.  If you want to the solution is to contact the distributor and tell them to register with Google and have the extension placed on their official app site. So now to prevent unwanted extensions being installed by third parties Google prevents me from being able to choose what I want on my own computer unless it’s registered with “Big Brother” first.