Google's Nexus 5 Wants to Be Your Next Off-Contract Phone 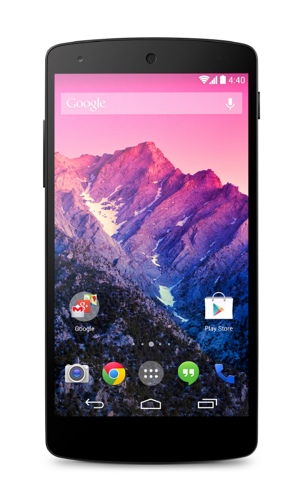 For sometime now, the big smartphone battle has been between Apple’s iPhone line and the Android-based Samsung Galaxy line. But that may seriously be about to change: Today, LG and Google introduced the long-awaited Nexus 5 phone, the first ever device to run Android 4.4 KitKat.

I haven't gone hands on with the Nexus 5, but I have spent some screentime with the Nexus 7, the Nexus 5’s sexy tablet cousin. One of my favorite features of that device is Google’s own version of its Android 4.3 operating system. It’s exactly what I wanted Android to be – devoid of special Samsung-specific skins and Verizon bloatware apps I have no interest in ever using. Even if you’re a diehard Apple fan, there’s a lot to love in Google’s own Android build. So much so that I can say if I lost my phone tomorrow and had to buy a new one off-contract, I'd probably pick up the Nexus 5 as a replacement.

The Nexus 5 goes on sale today at Google Play for $349 (16GB), no contract required. You may have to wait a while to get yours, however – this already-popular device has a 3- to 4-week waiting list.

This sounds interesting, but I’m not familiar with how you get service if you don’t have a contract.  Would you add this phone to a current service like AT&T or Verizon?
Thanks.

Here’s how it works, Lisa:

1) Buy the phone through Google Play. Other places are trying to sell the device for much more than its $349 MSRP—Best Buy tried getting away with selling it for $799 off-contract this weekend.

2) When your phone arrives, you have two options. You can either take it to your current carrier and ask them to add the phone to your account. They’ll do so without charge and without extending your current contract. That way, you can disconnect your Nexus 5 or switch carriers at any time you wish without penalty. You’ll still be eligible for your next phone upgrade on your usual schedule.

You may have to pay between $10 and $30 for a carrier-specific SIM card to activate, but that should be the only “hidden fee.”

Alternatively, you could choose a new discount carrier for your phone. T-Mobile, for example, has much lower monthly rates because it doesn’t offer contract discounts. Again, you have a lot of leeway to test carriers out if you want, because this is an off-contract phone.