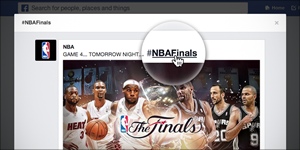 Facebook took a major step today towards social media unity by rolling out support for hashtags and public conversations.

Hashtags (e.g., #E3) are becoming an ubiquitous part of modern Internet lingo. An increasing number of social networks use them to help, as Facebook puts it, “add context to a post or indicate that it is part of a larger discussion.” An update about the new Xbox One gaming system might include the hashtag #XboxOne, which, when clicked, will navigate you to a page filled with other updates with the same tag and topic.

Adding hashtag functionality is a natural fit for Facebook. An increasing number of Instagram, Twitter and Vine users cross-post their content on Facebook, so hashtags are appearing on the social network regardless. Now at least they won’t look weird and out of place.

Hashtags are built around sharing, and often the inclusion of a new Facebook feature means people will be tempted to overshare. Before you do, remember that you can control who has the ability to read your hashtagged posts. This makes it a pretty good time to revisit your Facebook privacy settings.