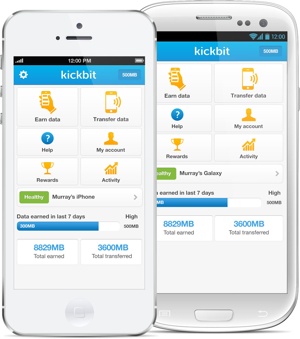 When I had to choose a data plan for my Verizon iPhone 5 last year, it was a bit of a challenge. Most months, I use less than 2GB of data. But there are times I do go on a data binge, streaming music or episodes of The Daily Show while at the gym. In the last few days of those heavy usage months, I barely even touch my phone out of fear of reaching my data cap and paying an extra fee.

According to Mashable, Boston-based company named Aquto thinks it has the solution to these types of overage problems. What if, instead of having to buy extra data, you could just “earn” it by watching advertisements and signing up for free offers? That’s the idea behind Aquto's Kickbit, a new app making waves in Europe.

With Kickbit, you still purchase data from your carrier as you normally do. Should you fear going over your allotment for the month, you’d open up the app and browse the available offers for more data. Sign up for a free trial of Hulu Plus, for example, and you’d earn an extra 300MB on top of your existing data plan. Watch a brief video ad instead, and you’d get a much smaller chunk of data – but possibly just enough to avoid fees from your carrier.

Currently, the Kickbit app is available for both iOS and Android users. It's still unsupported by U.S. carriers, though if its European launch goes well this year, it'll only be a matter of time before Kickbit reaches American shores.

What do you think? Would you mind watching a few ads to avoid overage charges? Or are you suffering from advertising over-exposure?

The ads burn less than you earn, right?