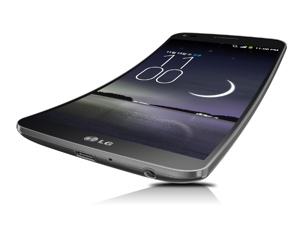 Take a quick look at your smartphone. What shape is it? Probably some boring rectangle, right? Or maybe a slightly rounded rectangle? Man, what an outdated shape that is!

See, rectangular shaped phones are the past – or at least, that’s what smartphone manufacturer LG wants you to think. Today, the company introduce the 6-inch LG G Flex, its first ever curved Android smartphone. And no, we're not talking about a mild curve like in the Samsung Galaxy Nexus. This curve is severe.

Why a curve? Explains LG: “The vertically curved design of the LG G Flex reduces the distance between one’s mouth to the microphone when the device is held against the ear, as traditional telephone handsets used to.” That helps improve sound levels by about 3 decibels over flat smartphones. The Flex’s curve also helps the device fit in your rear pocket better, since your butt is a curve. (That's LG's selling point, not mine.) And don't worry about it getting chewed up by your keys, because the Flex is covered with a self-healing coating.

As for the internals, the most impressive feature is likely the huge 6-inch curved (1,280 x 720) screen – big enough to allow the phone a duel-window multitasking mode. The other features are on-par with the high-end LG G2: It’s powered by a Qualcom Snapdragon quad-core chip, 2GB of RAM and an oversized 3,500mAh battery. The only disappointment: It ships with ye olde Android 4.2.2 Jelly Bean.

To be honest, I have no idea whether a curved smartphone will appeal to the masses. I like the idea of better voice communication, but I don’t use my phone as a phone that much. Personally, I’d rather have a device that lays flat on my desk and doesn’t chew up mounds of extra vertical space. But hey, to each their own, right?

The LG G Flex will be going on sale in Korea starting in November; availability in the U.S. will be announced thereafter.