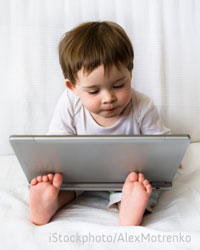 Computers, smartphones and video game consoles all have great educational content available for young kids. But when is it too soon to hand a device – or use of the Internet – over to your child? At what point can kids be trusted to use technology without parental supervision?

A new survey by Microsoft asked parents exactly that question and a series of others about technology, their children and the digital age. It shows that parents typically allow their kids to use computers and gaming consoles unsupervised at age 8, on average. Mobile phones, texting and social networking, meanwhile, aren’t typically allowed until age 11 – 12.

Plenty of parents do trust their children to use technology a bit earlier than the average, though. According to the poll, 29% of kids under the age of 7 are allowed to use cell phones unsupervised, 40% use computers unsupervised, and 41% of young children are allowed to play video game consoles on their own.

One other key finding: 83% of those surveyed say they set rules for their kids’ technology use before they turn 10. If you need some advice on how to do that, check out these 7 things every child should know before they go online. You might also want to check out these four recommendations for keeping kids safe online.