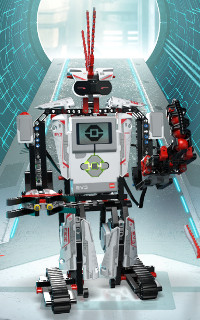 LEGO knows a thing or two about appealing to engineering-minded youngsters. To celebrate the 15th anniversary of Mindstorms, their line of robot-building kits, they have announced a new robotic construction set to be released in the second half of 2013.

One of the biggest advances is that the LEGO Mindstorms EV3 kit doesn't need to be connected to your computer by a cable like previous models. It uses your mobile device and wifi as well as more programming functions directly available on the robot itself.

The kit will come with instructions for your budding roboticist to build 5 different creations, with 12 more available for download. Step-by-step instructions are included in a 3D app that allows kids to zoom in on each step to get a close look of how each part fits and works together.

Since this line is aimed at beginners ages 10 and up, basic builds are easily set up so your child can have a working robot ready to go in minutes. Modular pieces can then be added to allow them to experiment with different functions, including the new IR sensor. A mission pad is included in the kit to put their creations to the test on an obstacle course. More advanced programming can still be done on a computer.

We named this one of our Best of CES 2013 products after seeing these in action. With their mohawks, as well as scorpion and snake-like builds, these robots are designed to appeal to kids. The iOS and Android mobile device app allows for easy and fun remote control utilizing the smartphone or tablet your kids already know well. And the fun factor is all part of the package. Your child can use the mobile app to make the snake robot unit not only slither around the room, but strike as if it were going to bite. Your kids will love that. Your dog, probably not so much.

The LEGO Mindstorm EV3 kits are due this summer and with a projected retail price of $350.