Should You Upgrade to iPhone 14?

Ah, the annual iPhone conundrum: is now the time to upgrade to the newest model? If you're eyeing a flagship iPhone 14 Pro model, there are a few compelling reasons to buy, including a significant camera upgrade, the ability to send an SOS message via satellite, crash detection with automatic emergency services notification, and an always-on, sunlight-friendly display. The case for upgrading to a regular iPhone 14 model isn't quite as strong, though both models will come with the same impressive safety features as the iPhone 14 Pro models, an improved camera, and the new larger, 6.7-inch display of the iPhone 14 Plus will certainly appeal to some. 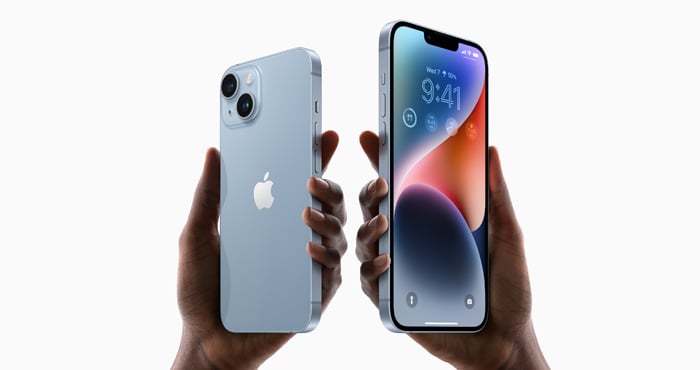 All the new iPhone 14 models – regular and Pro editions – are equipped with advanced processors, gyroscopes, accelerometers, and G-force sensors, along with new programming to detect if you've been in a car accident. Unless you tell it not to, your iPhone will automatically alert emergency services to your location and call your emergency contacts. 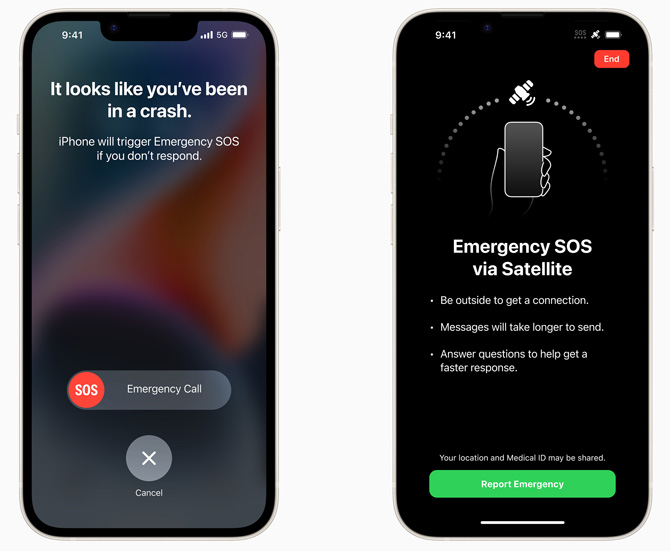 For those who encounter problems exploring more out-of-the-way locations, newly designed antennas in all iPhone 14 models can now connect with satellites to alert emergency services and provide location details. A new app helps locate a satellite so you can point your iPhone directly at it for maximum connection. Depending on environmental conditions, you may be able to send and receive automated text messages to communicate your situation. This piece of mind is worth almost any price for casual hikers to extreme outdoor enthusiasts in any locale in the U.S. and Canada. The Emergency SOS service will launch in November 2022 and will be free for the first two years. Ongoing pricing has not been announced.

Many iPhone owners upgrade to get a better camera, and Apple claims the cameras in the iPhone Pro models are "massive." iPhone 14 Pro's primary improvement is its new 48MP sensor, a four times improvement over the 12MP camera in previous iPhones, including the new regular iPhone 14 models and the iPhone 13 Max models. By default, the camera will use all of the extra data to make a better 12MP image. But you can also output full 48PM images or crop them into a smaller portion of your photo and retain a high level of detail.

The iPhone 14 Pro models also use a new upgraded A16 Bionic chip that speeds up your phone's operations and enables a lot more computational-photography-based picture, video, and flash enhancements, which Apple calls Photonic Engine. In particular, low-light shooting gets up to a 2.5x boost, and there are focusing improvements. And perhaps more impressive, the new Action Mode provides enhanced video stabilization, so you don't need a separate gimbal to smooth out your footage as your move your phone to capture fast-moving action. Cinema Mode, a new feature for iPhone 13 models that lets you dramatically shift focus from background to foreground in a scene, has also improved. You can also now shoot 4K video at either 30 or 24 frames per second.

For the regular iPhone 14 models, the 12MP image sensor will be larger than the iPhone 13's 12MP sensor. Bigger sensors capture more light and, as a result, deliver more accurate color and detail. Along with the Photonic Engine, the new sensor should improve image quality. The other useful new feature is the addition of autofocus to the front camera.

One of the most immediately noticeable differences in iPhone 14 Pro models is the replacement of the iPhone's iconic notch with what Apple calls a Dynamic Island. It's a long pill-shaped void that serves as an active notification bubble, which changes shape and size depending on the content and controls necessary in the app, such as incoming calls, next turns for navigation, music play/pause, timers, workout tracking, etc. 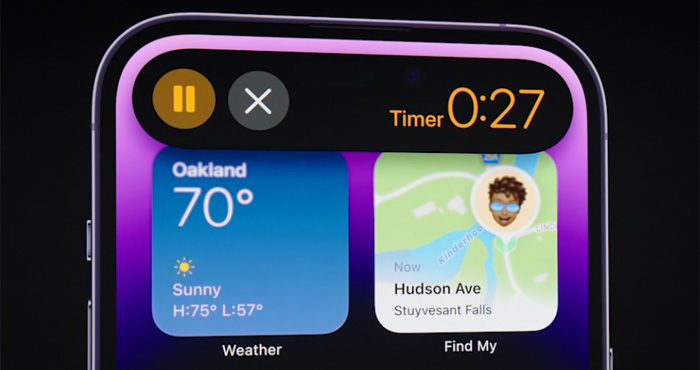 Another significant advantage to the Pro models is a significantly brighter display. You get 1600-to-2000 nits of sunlight-defeating brightness; your LED TV puts out around 1000 nits of brightness by comparison.

Plus, on the iPhone 14 Pro models, you get an always-on dimmed display to check the time and other status updates without tapping on the screen. And, the display won't eat into your battery life when dimmed. 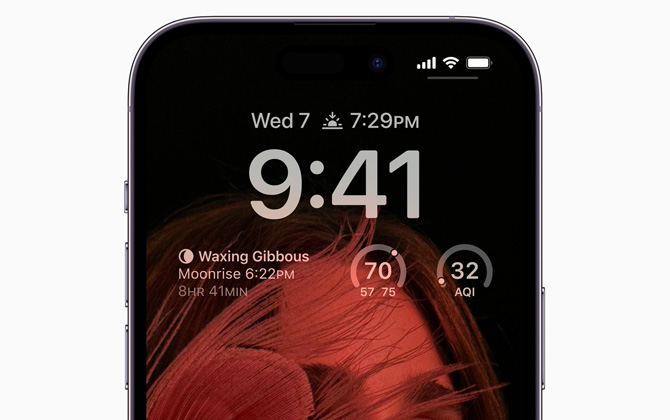 One change that could present major problems is the change from a physical SIM card to a baked-in eSIM. For the U.S., there will no longer be a SIM card slot, so you can't just pop your old SIM into your new phone. Instead, your carrier will need to activate your service. The major carriers – AT&T, T-Mobile, and Verizon – as well as U.S. Cellular, Xfinity, Tracfone, Straight Talk, Boost Mobile, and a handful of others, all support eSIM. However, some U.S. carriers don't support eSIM.

Even if your carrier does support eSIM, you can no longer buy a local SIM card when traveling abroad. For frequent travelers, this may be a deal breaker.

Other than Crash Detection and Emergency SOS via Satellite, the basic iPhone 14 models, the iPhone 14 and iPhone 14 Plus, don't offer much more than the minor performance and camera improvements over the last few generations of entry-level iPhones. You also can now opt for the new bigger 6.7-inch screen iPhone 14 Plus model. So the decision to upgrade to a regular iPhone 14 model comes down to your need or desire to add the security that comes with the advanced safety features and, with the Plus, a larger screen.

If you have the budget, the improvements to the new iPhone 14 Pro models are substantial and justify the upgrade, even from an iPhone 13 Pro. The camera is significantly better than the previous generation, the new safety features are best in class, and there's a sunlight-friendly, always-on display.

If you're looking to switch carriers or plans, this is a great time to check in with your carrier to see if they have a deal for you. For instance, Verizon is offering up to $800 off an iPhone 14 to new and existing customers when you trade in a phone and switch to a select Unlimited plan. T-Mobile is offering a discount if you're willing to move to their Magenta Max service. And AT&T is offering new and existing customers up to $1,000 off when you buy an iPhone 14 model with an installment plan and subscribe to eligible unlimited services.