You've read the hype and seen news reports of the queues outside retailers where the new iPad is being sold.

So, is it worth the hype?

I've been playing with it for most of the day, and here's my preliminary assessment – I'll have something more in-depth next week. 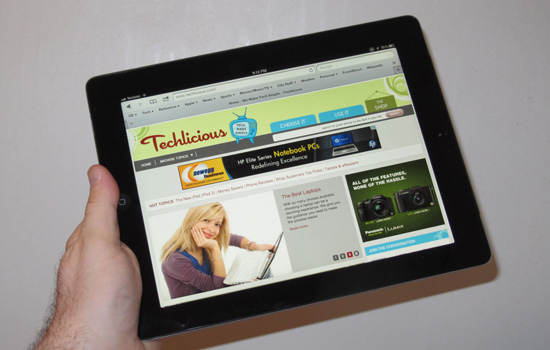 The new iPad's biggest improvement is its astounding Retina display. At 2048 x 1536 pixels – 3.1 million pixels – it has a million more pixels than any HDTV.

Why does a tablet need a higher resolution screen than your HDTV? At 8 to 20 feet away, you can't discern individual pixels on an HDTV, but at 8 to 20 inches away from your face, you sure can on a tablet or smartphone.

But not any more.

Everything you see and touch on the new iPad is crisper, brighter, sharper than any other tablet extant – and it's not exactly as if iPad 2 had a lousy screen. Colors are deeper and more vivid, text has razor edges, which makes everything you look at less wearying on the eyes.

The advantages of such sharp images is most apparent on things you read and things you watch. Smaller text is far more readable, which means you can keep text small and, therefore, scrolling and e-book page turns at a minimum.

All in all, the new iPad's Retina screen is almost worth the still-steep ($499-$829) price of admission.

At first glace, the new iPad is identical to the iPad 2. It is, however, less than half a millimeter thicker to accommodate a more commodious battery and weighs .07 ounces more. Like Lady Justice, I balanced one on each hand and could barely discern a difference.

Practically, this means the new iPad will squeeze neatly into form-fitting iPad 2 cases, such as the ZeroChroma case I use.

iPad now includes 4G LTE connectivity along with Wi-Fi, if you so choose (you can opt for a Wi-Fi-only model).

Speedier 4G LTE service is certainly an advantage (starting at $20 month, no contract required), but Verizon's models also add free hotspotting – you iPad can supply speedy 4G LTE Wi-Fi to up to five other Wi-Fi-enabled gadgets, including your laptop or smartphone. You could save a lot of money on hotel Wi-Fi with a 4G LTE-equipped iPad.

Siri is not included on the iPad for reasons not yet adequately explained, but you do get Siri's voice dictation.

Keyboards in all apps now have a microphone icon. Just press the mic icon and you can speak your thoughts to get astoundingly-accurate transcriptions – as long as you speak fewer than around a dozen words at a time, remember to speak your punctuation and you have an Internet connection, Wi-Fi or 4G. The transcription, you see, is done in the cloud.

iPad's new brain is Apple's A5X chip, an upgrade on iPad 2's A4 engine. In my limited play, I didn't perceive much of a speed boost – most of the processing power is designed to run the high-resolution display, which requires a lot of processing power.

Apple says the A5X chip does have a quad-core graphics engine, designed to boost game play. I'll have to let you know on that.

You get the same excellent 5 MP rear camera found on the iPhone 4S – most critics rank it as the best cellphone camera available.

I haven't had a chance to give it a full workout, but as you can see, the first video I shot with it on a dusky overcast afternoon looks smoother with brighter colors and less shake than videos shot with the iPad 2.

Still images are similarly improved, but quite frankly, I find using any tablet to take photos an awkward experience.

Apple says the bigger battery, like the more powerful processor designed to accommodate the demands of the Retina screen, will give you the same amount of juice as iPad 2. I'll have to let you know.
That's all for now. Tune back Monday for more details.

I think one of the uses of the camera on the iPad is going to be for coaching. You can catch someone doing an activity (sports, selling, speaking, whatever) and then the iPad has a big enough screen to really show the the even with a few others, something that’s a little awkward on smartphones.

I meant “share the event with a few others”

Charge and Sync your iPad simultaneously

Just curious if the new iPad has a USB charging wire for connecting to a computer.  I know it has a larger battery, so does it use a wall charger?  is it included? please check out our website.  We would love it if you would review our device.

iPads have never charged while

iPads have never charged while connected to a computer.

I use the wall charger for all the iOS devices I have. Saves the hassle of ejecting them from iTunes on he iPad….

You have to plug the iPad into your computer to sync it, (unless you have iCloud)

Oops..Meant saves you from having