T-Mobile's New Jump! Plan: Get a New Phone Every 6 Months 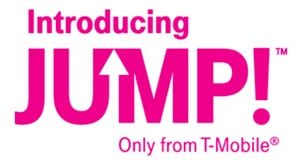 By far, Verizon and AT&T are the nation’s largest mobile carriers. And by virtue of that fact, the two companies get to make a lot of the industry standard rules. You know the rules I’m talking about (and probably hate them): Both companies lock you into 24-month contracts, and both charge you upgrade fees to get a new phone when that time is finally up.

Declaring that “two years is too long to wait for a new phone,” T-Mobile held a major press conference Wednesday in New York City to announce its new phone purchasing plan called Jump! Customers who sign up for the new offering will be eligible for phone upgrades twice every 12 months, all but guaranteeing you that you’ll always have the latest and greatest smartphone in your hands.

Since T-Mobile did away with long-term contracts in March, the cost of phones purchased through the company is typically spread out over two years of payments. When a phone is traded in with Jump!, the remaining payments on the old phone are cancelled, leaving you only to make payments on the new phone.

Of course, there are a few catches. First, Jump! isn’t free – you’ll pay an extra $10 a month for the rapid upgrade option. To avoid any trade-in fees with the T-Mobile plan, you’re required to trade in your old phone in good, working condition – that means it needs to boot up with no water damage and no cracked screen. If you’re unlucky enough to lose or damage your phone, you’ll have to pay an insurance deductible before you get a new one – as high as $175 for an iPhone 5, plus a $5 “service warranty processing fee.”

But is it worth it?

One of the main selling points of Jump! is that it includes insurance coverage, which may already be costing you $7/month. That considered, it's probably not the worst thing in the world to pay an extra $3 just to have the option to get a new phone sooner. But the real drawback to Jump! isn't necessarily that monthly fee – it's that you'll wind up paying a heck of a lot of money over 6 months for a phone that you're just going to trade in.

Say you decide to sign up with T-Mobile and its Jump! plan so you can buy an iPhone 5 now, and then upgrade in 6 months when the iPhone 5S is available. You'll pay $145 up front for the iPhone 5, plus another $21/mo. to finance the phone until you trade it in. You'll also make $60 worth of payments to Jump! before you're eligible for your upgrade. Ultimately, you'll wind up sinking $331 (plus tax) into an iPhone 5 that you've basically just rented. Over half the value of the phone disappears into thin air. And you'd be losing that kind of money every 6 months if you keep swapping, which is the real kicker.

Without question, the standard two-year cell phone contract stinks. It’s something of an antiquated relic that we keep around not because it’s the best way to do business, but because it’s the way we’re used to doing things. So kudos to T-Mobile for trying to shake things up. But ultimately, though, Jump! is just a glorified rent-to-own plan that’ll flush a lot of your hard-earned money down the drain. I wouldn’t recommend it. If you want a new phone every 6 months, you'd be better off just selling your old one (used smartphones hold their value exceptionally well) and buying a new phone for full price.