Torch: The Best BlackBerry Ever - But is it Enough?

In our hands-on with the Torch today, the capacitive touch screen was very responsive and the slide-out QWERTY keyboard was up to the normal BlackBerry standards. The 3.2-inch (360 x 480) display on the Torch is smaller than most of its competitors—the iPhone 4 display is 3.5-inches and the Samsung Vibrant, HTC EVO and DROID X are all 4-inches or larger. So the BlackBerry Torch's appeal will still probably lie with those who are focused on email and security over multimedia and browsing. 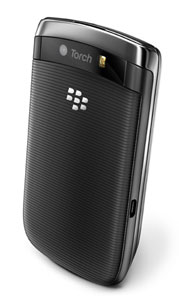 One drawback to the slideout keyboard is weight. Even with its relatively small 3.2-inch screen, the BlackBerry Torch is slightly heavier than the much larger DROID X and a full 1.5 ounces heavier than the Samsung Vibrant.

The BlackBerry Torch sports a 5 MP camera with flash and autofocus, but video recording is only standard definition. Again suggesting that this phone still hasn't shaken its business focused underpinnings. We won't be able to evaluate the quality of the camera until review units are available.

Memory-wise, the Torch comes with 4 GB on-board and will support up to a 32 GB microSD card. This should be plenty for most folks, but is still less than the 8-16 GB of on-board memory offered in the DROID X and Samsung Vibrant, respectively.

The new BlackBerry OS 6 is a big step up from what you'd find on previous BlackBerry devices. The web browser handles HTML 5 and provides tabbed layout that lets you easily switch between web pages. The browser also has pinch-to-zoom capabilities, which should come in handy on the 3.2-inch display.

BlackBerry 6 OS also provides the Torch with more social networking tools, allowing you to combine email, Facebook and Twitter updates all in one place. It's nice to see RIM recognizing that even business people may have lives outside of their corporate email accounts.

In short, the BlackBerry Torch appears to be the best BlackBerry device ever made. But BlackBerry isn't operating in a vaccuum, and most of the updates seem to be bringing it up to where the iPhones and Android devices were months ago. Plus, the BlackBerry App World is still at a significant disadvantage versus the Android Marketplace and Apple iTunes in terms of available apps. So we're looking forward to a full hands-on where we can evaluate the complete package in more detail.

The BlackBerry Torch will be available on August 12 for $199.99 with a 2-year service agreement and data plan on AT&T, online at www.att.com/blackberrytorch, and at Best Buy, Wal-Mart and RadioShack stores.