Use Your HTC Phone to Cure Cancer 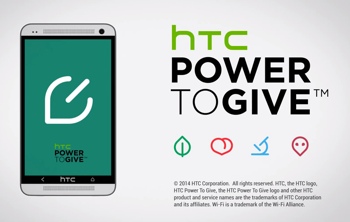 Smartphone manufacturer HTC today announced “Power to Give,” a new initiative that harnesses the collective processing power of the company’s smartphones to solve epic scientific challenges.

Power to Give (PTG), an Android smartphone app currently in beta, works a bit like Folding@Home, Play to Cure and other similar projects. Once installed on your HTC phone, research institutions of your choice will automatically begin using its computing power during downtime to help analyze important data.

The app only works when your phone is connected to WiFi and a power source. It never eats up battery power or your data allowance, and it won't interfere with your normal use of the phone.

HTC is currently highlighting four specific PTG projects: Computing for Clean Water, Help Fight Cancer, Say No to Schistosoma and Nutritious Rice for the World. Other popular projects like SETI@Home are also available. You can divide your phone’s efforts as you choose.

HTC owners can download Power to Give on Google Play.

As long as the program

As long as the program has points that you can earn, it will work

Reputation and points systems can affect motivation, and may be the only source of motivation for some people to do something charitable

People by nature can be mostly status-conscious, self-interested, and competitive. Either we have a system that allows people to satisfy their ego by spending money on the purchasing of charity points, or we continue to let people flaunt their wealth through expensive cloths, cars, jewelry, etc

tl;dr: People will brag either way, so we might as well shift it to something more beneficial to everyone

Using World Community Grid as an example, I wish they would use OAuth so that I can just sign up instantly with my Google account

Here’s a good review that I found that also suggests the use of a Google credential:

“Right now, it is cumbersome since you have to register for each project individually. Can’t we use our HTC or Google login credentials once when we start the app for the first time? I’d like to participate in all projects, but I’ve only registered for two so far. The UI is OK, but there’s no way for users to track how much they have contributed to the different projects. It would be nice if there was a better visualization which showed progress rather than the standard progress bar. have you considered gamification or connection with Google Play games so handset owners can track how much they have contributed and compare to their friends. We all love competition and I’m sure there would be some people who would plug their phones in a work a bit more just to outscore their friends.”

The Google One Today charity app for Android and iOS is another application that tracks your contributions.