How to Back up Your Android Game Data

If you regularly play games on your Android, there could come a day when you have a dilemma on your hands. What if your phone is misbehaving and you have to do a factory reset? Or what if you get a new phone or your current handset is lost or stolen? Do you really want to lose all your points, levels and trophies?

Thanks to an app called Helium, you don’t have to. 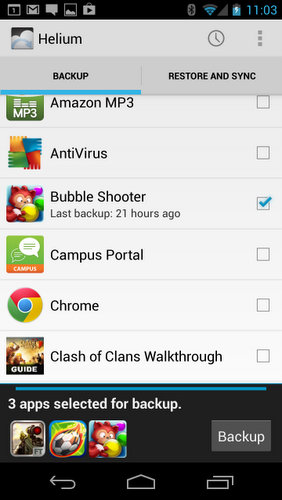 The free ad-supported version only lets you backup and restore apps to an SD card, but if you’re really attached to your game data you’ll ante up for the premium version. It doesn’t include ads and you can save your apps on cloud storage providers including Google Drive, Box and Dropbox so as to restore them back onto your device whenever you want. It also lets you schedule automatic backups so you don’t have to worry about forgetting to manually save your games.

Keep in mind that Helium isn’t just for backing up games. You can also backup your text messages or data from any app on your phone, as long as the developer allows it. On my phone several apps wouldn’t allow backups, such as Credit Karma, Mint and Spotify.

To use it you have to download the Helium app to your Android phone and also install Helium software on your desktop. In addition, the Helium website where you get the software also pushes Windows users to a page where you have to install on your PC the appropriate drivers for your phone.

Once you’ve done that Helium tells you to change your phone’s settings to enable USB debugging, which it describes in a notice as “intended for development purposes only,” and for copying data between your computer and device, installing apps without notifications and reading log data.

From there you connect your phone to your PC via USB and make sure both the mobile and PC apps are running. The two make a connection and your phone will tell you Android app backup is enabled. You can go into the mobile app, tell it which apps to backup and whether you want to send the data to an SD card or to one of the supported cloud storage services.

I chose to send data for three apps on my phone to my Box account and doing so was simple and fast. To test the restore function I then uninstalled the apps from my phone and reinstalled them fresh and clean, sans any user data.

To get the data back on my phone, however, I had to use the premium version of Helium. Helium’s Restore feature connected with Box and let me choose which app data saved there I wanted back on my phone.

The result? Within seconds all three apps were loaded up with the data they had on them before I wiped them clean with the reinstalls.

In short, Helium is an easy to use app that does its job admirably. Keep in mind if you buy the premium version you also need the free version on your phone.

Price: Free or $4.99 for the premium version at Google Play.

Thanks for the info!  I couldn’t find an app on my own that allowed me to back up all my data without root access.

How can i save my progress in game like edge of tomorrow which doesn’t support Google play games backup or there is no checkpoint in this game every time i quit the game i hv to start frm begins….

Find an article that actually teaches u how to navigate the files and folders in your device. This (pathetic excuse masquerading as an)article is basically SPONSORED CONTENT. I.e. an advertisement for that app that “automatically” keeps u tech illiterate and on Apps for simple things, like dragging a folder from your device, to a PC, and then back again.

You are completely out of line

This article is not sponsored content. We received no compensation of any sort for recommending this app - we picked it because it was a very helpful app for backing up and transferring data at a time when Android didn’t make it easy to do so (this article dates from 2013). For most users, using Helium would be much easier than dragging and dropping folders and subfolders and hoping you found and picked the right ones. In fact, we wrote the article because it solved a problem that we were facing simply and effectively.

You’re free to disagree with our recommendation (and we disagree with yours), but making completely false accusations about us getting paid to write this article and not disclosing it is out of line.

Your (pathetic excuse for)an article, what a joke. Your answer to “How do I do something” is, “don’t do it; BUY an app to do it for you instead. You’re just a symptom of the retardation this app-culture has wrought on the average end-user’s computer knowledge, or rather lack thereof.

Your tablet is a computer. It has a file directory like any computer. The data can be found and saved to another temp location, to be moved back at a later time. Where those files are, and how to back them up should be the content of this article. The fact that you got paid for this is pathetic. The possibility you may have also gotten paid by the Apps maker for masquerading an Advertisement as an actual article is laughable.