To achieve the best audio quality in any environment, you need to understand the acoustics and tune the sound to that space. That's what CustomTune does. It uses a sound tone to map your ear canal and create a model of the acoustic characteristics, and then uses that information to tune the sound, including the noise canceling, specifically for your ear. The result is a personal auditory space, free from life's annoyances, where you can peacefully enjoy music or just relish the (almost) complete silence.

The one downside I found in my testing is that the QuietComfort Earbuds II struggled to cancel sounds in loud urban environments from intruding on my microphone during calls. My colleague complained that my voice often wasn't elevated above the ambient noise, and that sometimes the buds would amplify environmental noises, like kids yelling on a playground, as though it were me talking. This was not an issue for calls I made within my far quieter office.

For most people, I'd highly recommend the QuietComfort Earbuds II for their amazing noise canceling abilities. 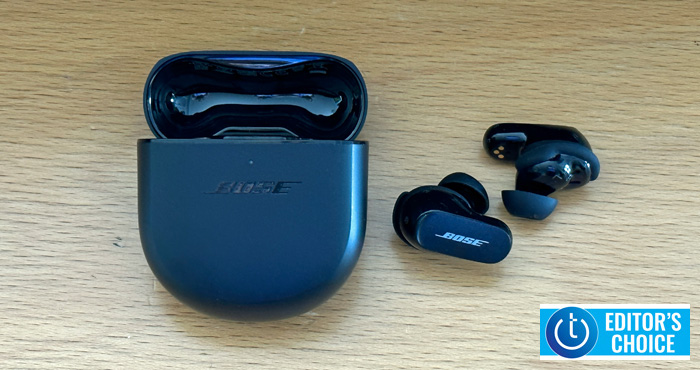 In a year when diminutive earbuds and cases have become the norm, I was immediately struck by how large the QuietComfort Earbuds II buds (1.2 by 0.68 by 0.88 inches) and case (2.61 by 2.34 by 1.05 inches) are. The buds have a chunky top and short and wide stem. On the go, though, the bulk of the bud is largely hidden. And despite its size, the case’s rounded shape makes it easy to slip into your pocket.

There are three pairs of eartips and three sets of stabilizers in the box, the minimum I’d expect from high-end earbuds. There's also a USB-C to USB-A cable.

You can use the QuietComfort Earbuds II right out the box – they're ready to pair when you open the case, and you can use your device's Bluetooth settings. However, it's well worth downloading the Bose Music app to access useful tools for customizing your listening experience and verifying your earbuds fit properly.

Bose now has an Eartip Fit Test in the app. So once you select eartips and stabilizers and the buds feel good in your ears, the app can verify that the buds have a good seal.

The default sound is well balanced, but you can use the three-band equalizer in the app to manually boost and reduce the bass, mid, and treble frequencies from -10 to +10, or choose from the Bose presets for Bass Boost, Treble Boost, Bass Reducer, and Treble Reducer.

The buds come pre-loaded with Quiet mode, which is full noise canceling, and Aware mode, which lets through environmental sounds and automatically adjusts as noise levels change. Using the app, you can set up two additional modes with a custom level of noise canceling on a scale from 0 to 10. The earbuds cancel sound equally across frequencies, and as you slide the noise canceling bar you can hear the volume of the outside world rising and lowering to achieve the best mix of sound. Once you've set the modes up, they are added to the earbuds and you can select them using the on-bud controls.

The QuietComfort Earbuds II are easy to use once they're set up. Equally important, they are comfortable to wear for hours at a time.

The experience starts with plucking them out of the case. Thanks to a ridge on the back of the earbuds, it's easy to get a good grip. You'll need it because the magnets holding the earbuds in place are fairly strong.

The buds have presence detection and will auto-pause or play audio when you remove or re-insert them. You can also automatically answer a call by inserting a bud. If you don't like these features, you can turn them off in the app.

The QuietComfort Earbuds II have capacitive touch controls for the usual play/pause (single tap), volume (swipe), and track skipping forward and back (double and triple tap). You can also use the app to assign a long press and hold on either bud to access your voice assistant or switch between noise-canceling modes. The capacitive controls are very responsive and easy to use. I especially like the swipe action for raising and lowering volume. Occasionally, though, I would inadvertently turn off the sound when adjusting my mask or putting my hair up.

While the buds are large, they are comfortable to wear for extended listening sessions. In my week-long test, I wore them for six hours one day and didn't experience ear fatigue.

The QuietComfort Earbuds II are IPX4 rated, making them sweatproof. However, I wouldn't recommend using them as your everyday workout headphones and consistently exposing them to high levels of moisture.

Unfortunately, there is no multi-point pairing. However, the buds will remember pairing with six devices, and you can easily switch between them using the app.

The QuietComfort Earbuds II produce great sound that is complemented by the best noise canceling I've experienced. However, the same level of excellence is not achieved when making phone calls in noisy, urban environments.

To test audio quality, I listened to music that I downloaded to my iPhone in lossless CD quality and streamed through the Apple Music app. The buds have Bluetooth 5.3 with support for AAC and SBC Codecs – no aptX for Android. I compared the QuietComfort Earbuds II to the Jabra Elite 85t ($229, on sale for $179) and SoundCore Liberty 3 Pro ($169, on sale for $129.99). I also tested call quality against these models from indoor locations and on busy New York City streets.

From the left, the Bose QuietComfort Earbuds II, Jaba Elite 85t, and the Soundcore Liberty 3 Pro

The earbuds process all sound, whether listening with full noise canceling or mixing in some ambient sound. Because the earbuds use CustomTune to tune the sound to your ear canal, the buds are better able to cancel noise than any other earbuds I've tried. At home, with the air conditioner running or the window open, there was near silence. When my co-worker spoke in a normal tone, I could only see his lips moving when the music was playing – no sound at all. Busy city streets and a full noisy train challenged the buds more, but they still did an admirable job. Without music, it was like I turned down the volume on the world. And when I was listening to music, I could enjoy it instead of being annoyed by the loud conversations and other noises around me.

Audio is a pleasure to listen to with the Bose QuietComfort Earbuds II, with plenty of rich bass and detail in the mids and highs. I like the Bose flat EQ, but if you like more bass or treble, boosting them doesn't result in boominess or brassiness.

Call quality is good if you're in a relatively quiet environment. However, the QuietComfort Earbuds II don't excel in applying noise canceling to the mic during calls in loud environments. The buds sometimes seemed to have trouble deciding when I was speaking, amplifying outside sounds that weren't my voice. That issue was compounded by the fact that sound mutes entirely when you're not speaking, so the person you're calling has silence from your end when you're not speaking and then bursts of sound when you're talking, including background noise.

Battery life is average for the QuietComfort Earbuds II. They will run for up to six hours, which is average for noise-canceling buds. A full charge takes an hour and a quick charge of 20 minutes results in two hours of use. In addition, the case provides three extra charges for up to 24 hours of listening time.

An LED on the inside of the case shows the charge level for the earbuds, and an LED on the outside indicates the case's charge level. You can charge the case with a USB-C cable but not with a wireless charger, which is disappointing for buds at this price point. 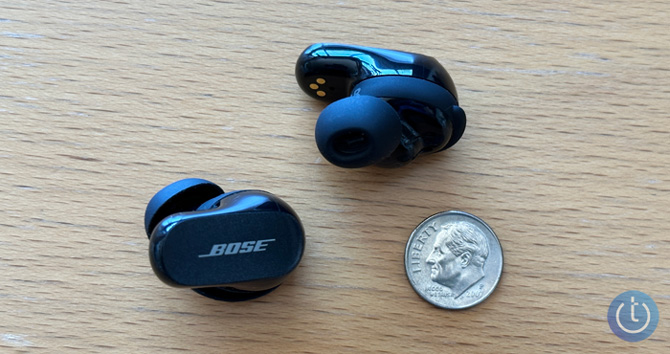 If you're looking for the best noise-canceling listening experience in a true-wireless earbud, look no further than the Bose QuietComfort Earbuds II. The noise-canceling is next level, and the sound is immersive, detailed, and backed by solid bass. The only significant drawback is the poor microphone noise canceling for calls in noisy urban environments – for in-office zoom calls and calls in quieter environments, the buds perform well. So for most people, the Bose QuietComfort Earbuds II would be my recommendation for the best noise-canceling true wireless earbuds.

Have these earbuds been tested on a shooting range and against what calibers. What is the db reduction level and response time (ms)

Not recommended for shooting

To the best of our knowledge, no active noise cancellation earbuds or headphones have been tested in shooting range conditions, nor would we recommend any pair for that. First, it is unlikely that a pair of small earbuds could generate enough sound to negate the volume of a shot indoors. If they could, that would itself be dangerous because the earbuds could generate an extraneous sound that was capable of damaging your hearing. And if the noise cancellation failed for some reason (batteries died!), your hearing would no longer be protected.

Would these cancel the noise of my next-door neighbors’ barking dogs that are 20’ from the large window in my office space?

They would reduce the noise significantly. The noise cancelling on these really is superb.