If you’re a Comcast Xfinity internet customer with poor WiFi in parts of your home, Comcast’s mesh WiFi xFi Pods, which are designed to work out the box with Xfinity routers, would seem to be the perfect solution. We were not impressed by the first-generation xFi Pods, which had poor throughput. The new-and-improved xFi Pods Gen 2, however, which measured five times faster than the originals in our tests, are a great option for most Xfinity customers. 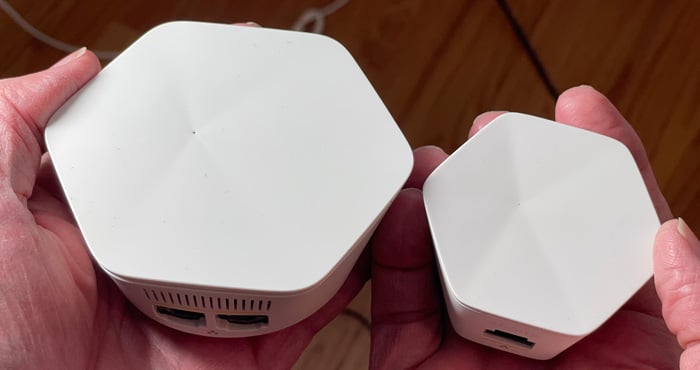 The styling’s the same – still a six-sided puck that plugs into an AC outlet as unobtrusively as a night-light or air freshener. However, the Gen 2 xFi Pods are bigger than the first generation xFi Pods (Gen 2 on the left and Gen 1 on the right) and spot air vents on the sides and rear to dissipate heat.

Comcast has significantly upgraded the WiFi inside, more than doubling the throughput of the original Pods with an upgraded tri-band AC3000 radio. The maximum throughput is now 500 Mbps instead of 200 Mbps, and in addition to a 2.4Ghz band and 5Ghz band, there’s a third (5 GHz channel) radio devoted to back-channel communications and service optimization. The new Pods also pack a pair of ethernet ports (instead of just one) for two hard-wired devices, like streaming boxes and smart home bridges. 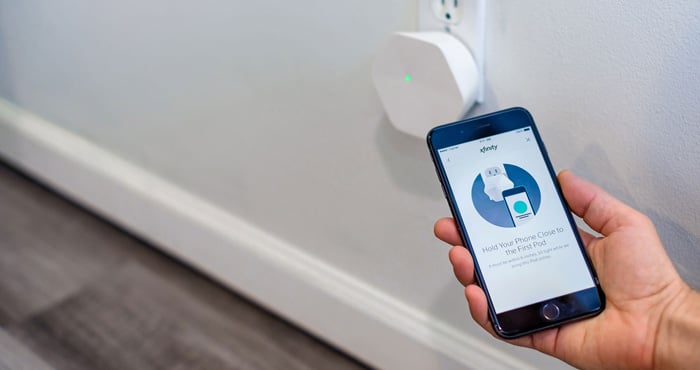 Exclusively designed for Xfinity internet and equipment customers, xFi Pods only work with an Xfinity Gateway serving as the main WiFi router. Like the first-generation Pods, the Gen 2 Pods are easy to install. Setup is performed with the same Xfinity xFi app you’d use on a smartphone or tablet to monitor and control other Gateway-connected devices (from computers to game systems to lights) and supervise elements in an Xfinity security system. Once plugged in, an xFi Pod is automatically recognized and then awakened by holding your smartphone six inches away.

Note that the Gateway must be in the (default) non-bridge mode.

To put the Gen 2 Pods to the test, I returned to the scene of our earlier Techlicious Gen 1 xFi Pod test to witness an equipment upgrade.  Namely, the 4,000 square foot suburban home base for my friends Meg and Gary Jones, their two young adult daughters, and Gary’s popular foodie website – The Reluctant Gourmet.

The Joneses have a centrally located XB6 Gateway stationed in their kitchen and Blast-grade service that puts out a peak WiFi signal in the same room at 357 Mbps. (The Speedtest by Ookla tracking was done on Gary’s iPhone 11 Pro Max and my new iPhone 12 Pro four days after these self-maximizing new devices had settled in and learned the territory.) 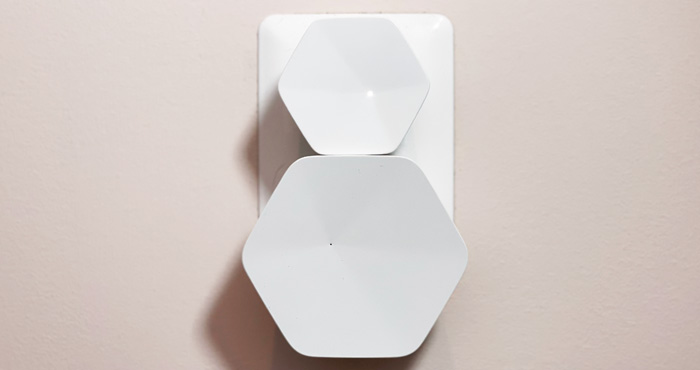 With a Gen 1 xFi Pod plugged into power 25 feet from the Gateway at the bottom of a staircase, the WiFi download speed clocked in Gary’s office (one flight and another 25 feet up) measured 57 Mbps. After subbing in a new Gen 2 xFi Pod, the office download speed leaped to 282 Mbps – literally five times faster!

Equally staggering before-and-afters were clocked with our second Gen 2 xFi Pod placement – a pretty straight 25-foot shot in the other direction from the Gateway to a location just outside Meg’s office. In our initial tests, Meg was getting 65 Mbps inside her office. But after installing the Gen 2 xFi Pod, Speedtest reported 350 Mbps in Meg’s office – virtually the same speed as directly from the Gateway.

Clearly, your results may differ. Xfinity still plants a warning in the product page FAQs that “Pods help extend the range of WiFi coverage in your home to hard-to-reach areas or areas with poor WiFi signals. They are not intended to provide the maximum speed of your Internet speed tier throughout the home.” Still, in our case study with Gen 2 xFi Pods deployed,  the signal shrinkage was a mere 21 percent at worst. That’s better than anyone could have dared to ask for and is unlikely to be bettered by any other third-party mesh network gear.

There are a few cases when the Gen 2 xFi Pods aren’t the best option. First, if you are using your own router for Xfinity service and don’t want to pay the monthly fee for an Xfinity Gateway, you can’t use the Gen 2 xFi Pods.

When you install the Xfinity Gen 2 xFi Pods, one network is created with two bands, instead of two networks with separate network IDs (SSIDs) and passwords. The Xfinity Gateway and Pods automatically steer traffic to one of the two bands, 2.4Ghz or 5Ghz. So the second group that shouldn't use Gen 2 xFi Pods are those that have old WiFi devices that don’t support 5Ghz. Without manual control, you can’t tell your devices to use the same band and can can get into situations where devices can’t “see” each other because they are operating on different bands.

Third, some people will want to choose which devices use each band to allocate bandwidth. For instance, you might want a gaming system or your streaming services to be set up on one band to ensure maximum throughput while other devices use the other band. 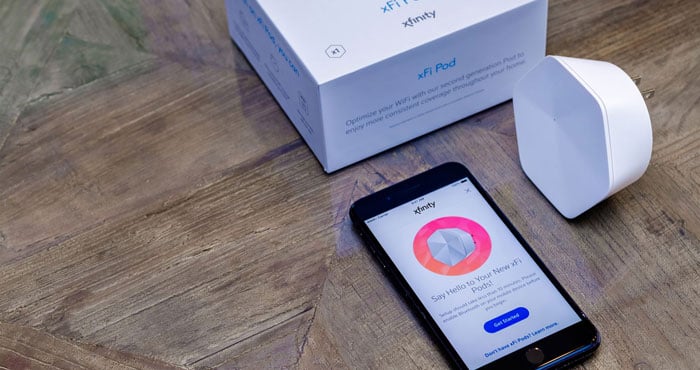 If you want plug-and-play simplicity to extend the reach of your Xfinity WiFi service with maximum throughput, the new Gen 2 xFi Pods are the best choice for most people. Only those who don’t want to pay for an Xfinity Gateway or need to manually control which band their devices use should consider choosing another mesh WiFi system.