5 Ways Smartphones Are Harming Our Health 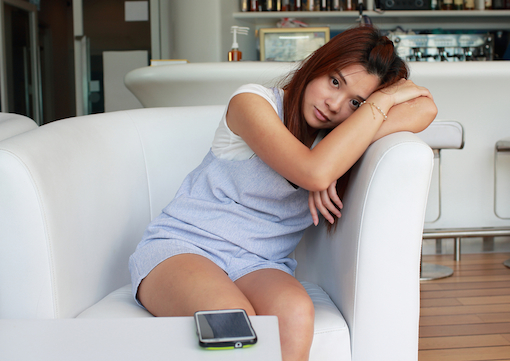 We may not have hoverboards or flying cars yet, but technology has advanced by leaps and bounds since the days of faxes, car phones and room-sized computers.

And of all the technological marvels unimagined by generations past, it's the smartphone that changed the way we live the most. We can connect with friends halfway around the world while on the go, stream high-definition TV, and order just about anything from anywhere with a couple taps.

But in the drive for better, faster technology and ever more instant ways to communicate, our health may be languishing.

We spoke to health experts about the potential side effects from overuse of smartphones. Here's what's at risk.

In the century since the amplifier was invented, naysayers the world over have wagged their fingers at how loud music might cause young whippersnappers to go deaf. Unfortunately, the naysayers may have a point: according to the National Institute of Health, around 26 million Americans suffer from noise-induced hearing loss.

Headphones are part of the problem -- specifically, mediocre-quality headphones such as the ones that come bundled with most MP3 players and smartphones. Loud noises can damage the tiny hairs in the inner ear, which vibrate according to sounds and transmit chemical signals through nerves to the brain. Over-shocking these hairs damages their ability to pick up sound vibrations.

Repeated exposure to noises above 85 decibels can therefore cause permanent hearing loss. To get an idea of how loud that is, the NIH clocks normal conversation at about 65 decibels, heavy traffic at 85, and a concert at 105 decibels.

The maximum volume of an MP3 player or smartphone is around 105 decibels. The Dangerous Decibels public health campaign estimates that listening to music at this volume for more than four minutes would likely result in damage to hearing. Taking it down to 94 decibels – roughly the volume of a motorcycle revving its engine -- the maximum permissible listening time is one hour.

Of course, most of us believe that we know better than to turn the volume all the way up. But damaging levels of sound may not feel as loud as they are, especially if volume is increased slowly. For example, listening to music in noisy places means you might turn up the volume to hear past the external background noise.

Mediocre-quality headphones tend to transmit low-frequency bass less effectively, causing the listener to turn up the volume in order to hear more detail. Unfortunately, this ends up raising the volume of high-frequency sounds, which can damage ear drums.

One way to assess hearing loss is to test how well you can pick out speech through background noise. See how you compare to other people your age at the "A Century of Amplified Music" website.

How to counteract it: Turn down the volume. Buy good-quality headphones so that you don't over-compensate for inadequate bass by ratcheting up the volume. If you are often in noisy places or listen to music while commuting, get noise-canceling headphones. There's also some evidence that antioxidants and magnesium in the diet can reduce the risk of hearing loss, while Cornell researchers found that a chemical called nicotinamide riboside prevented noise-induced hearing loss in mice – so one day, it could be available as a vitamin supplement.

The rise of affordable personal tech has hastened a transition to more sedentary work habits and leisurely lifestyles. Where once we may have walked to a shop or, yes, played outside, it's now de riguer to hit eBay or Amazon before firing up the iPad or PS4 for a few hours.

Worldwide obesity has doubled since 1980, and according to a 2012 study by the Milken Institute think tank, one factor is an increase in “screen time” -- the hours we spend in front of computers, video games and, of course, smartphones.

Americans top the list, with 33.8 percent of adults obese, but kids are catching up too, with a strong correlation between screen time and childhood obesity -- especially for children who are already overweight.

“We are seeing a shift from screen time in front of the TV to what's happening on cell phones and tablets,” says Dr. Indira Abraham-Pratt, a licensed psychologist at Florida Hospital's Center for Child and Family Wellness.

She says there is a link between increased screen time and lesser frequency of family meals, a factor in childhood obesity. “The less family meals are occurring, the more prone children are to being overweight or obese,” says Abraham-Pratt.

Abraham-Pratt says that family meals are good opportunities for growing children to develop good eating habits based on parental models, whereas the alternative is often eating in front of a computer or smartphone, where both kids and adults may overeat because they aren't paying attention to the food.

Of course, the gadgets we know and love aren't exclusively responsible for a lack of mindfulness at mealtime. Eating while immersed in that new vampire romance paperback can be an equally bad food habit, but a far larger proportion of children have a fixation with screens than with books. “On a societal level, more children are prone to spending excessive time on their phones or video games, than on books,” Abraham-Pratt says.

How to counteract it: For starters, don't eat in front of a screen. While we grownups may be stuck staring at computer screens for work, limit screen time to one to two hours per day for children, Abraham-Pratt says. Kids who are still developing their social, personal and motor skills need the time to interact with other kids and to work on those pitching arms. Abraham-Pratt also recommends getting at least one hour of physical activity daily. “Fitness apps and activity trackers can definitely be a good thing,” she says. “They hold you more accountable and increase awareness of activity.”

A 2014 study carried out by independent opticians found that a particular wavelength of light emitted by phone and tablet screens is “potentially hazardous and toxic to the back of the eye”.

While most light we see -- whether from the sun, lamps or electronic devices -- contains all frequencies of light, the blue-violet frequency is particularly prevalent in handheld electronic device screens. According to the BBC, optician Andy Hepworth said that tests had found over-exposure to blue-violet light may put people at greater risk for macular degeneration, which can cause blindness.

However, not every eye expert agrees. “The eye itself is not injured by looking at a smartphone versus a book,” says Dr. Rachel Bishop, chief of consult services at the National Eye Institute. “What can happen is strain and discomfort due to long periods of focusing on small objects, but there is no damage at a molecular or chemical level.”

Eye strain can come about as a result of over-using the muscles of the eye when focusing, resulting in headaches, while the intense focus we give to small objects such as smartphones playing YouTube videos may mean we blink less, resulting in dry eye.

“The one question that is less well understood is whether near work such as focusing on smartphones can lead to shortsightedness,” Bishop says. While a 2001 study that followed two groups of 13-year-old boys found that near work might be a factor in myopia, there hasn't been a conclusive link drawn yet.

How to counteract it: Bishop recommends the 20/20 rule. For every 20 minutes you are staring at a screen, take a 20-second break and look at something 20 feet away.

That blue-violet light from our smartphone screens and tablet screens could also be wreaking havoc on our sleep patterns. “Over the course of a day, we have a sleep drive that builds, much like a hunger drive, but it doesn't go into effect unless you have the right level of [the hormone] melatonin,” says Dr. Michael Breus, who holds a PhD in clinical psychology and is board-certified in sleep disorders. “Melatonin is like the key that starts the engine for sleep.”

However, light, especially blue light, tends to ward off the production of melatonin. “When this specific frequency of blue light is very close to our faces [such as when we are holding smartphones or tablets] it tells the body to stop producing melatonin,” Breus says. Ergo: long nights clutching your phone, wondering when you'll ever fall asleep.

On the flip side, TVs that emit the same shortwave blue light -- but which are normally farther away from our faces -- don't have the same effect. “The proximity of the light source is significant,” Breus says.

The second factor is brain activity. We passively watch TV but when we use our smartphones, we're responding to emails or interacting on social media. “If you're playing Candy Crush Saga at 1am, your brain cells are actively engaging,” Breus says. “That's where we see this autonomic arousal -- the wake elements of your system coming into play when they should be calming down.”

How to counteract it: Breus recommends imposing an electronic curfew of no electronic devices for one hour before bed, except TVs: “I don't believe you have to stop watching TV before bed. Just make sure you're a good 10 feet from the light source.”

Alternately, fight tech with tech. SleepShield is a blue light screen filter for iPads, iPhones and the Samsung Galaxy S3/4/5, while Lighting Sciences Group makes an LED bulb whose light omits the wakey-wakey blue type. “I use these in my bedside lamp, so that if I want to read, I don't get that blue light,” Breus says. To further tweak the light you get at night, check out Philips Hue smart bulbs, which can be controlled via iOS apps to emit different color compositions of light in profiles such as “relax,” “energize” or “concentrate.”

From an efficiency standpoint, the capabilities of smartphones have led to explosive growth in how we communicate and get things done. But for anxiety, it can be both harmful and helpful, says Breus.

Many people feel a compulsion to respond to texts, emails or other alerts as they arrive, allowing outside tasks to leak into time spent on a current task, whether it's leisure or business.

“We have some sort of information addiction that could be creeping up,” Breus says.

A side effect of having access to so many different streams of information – and at least two or three gadgets to access them from – is the rise of multitasking, something that has repeatedly been found to decrease our brains' grey matter density, the stuff that's related to cognition and emotional control.

For example, a 2014 University of Sussex study found clear links between multitasking over several media devices and poor attention span, depression and anxiety.

Neuroscientist Kep Kee Loh who co-authored the study says, "Media multitasking is becoming more prevalent in our lives today and there is increasing concern about its impacts on our cognition and social-emotional well-being.”

For example, Forbes reports a University of London study that found that people who multitasked while doing cognitive tests dropped as many IQ points as they would have if they had just smoked marijuana, or stayed up all night.

How to counteract it: Set times to deal with your different streams of information – work emails, texts and social media – and deal with them one at a time. Set a “Do Not Disturb” mode if available in your phone's Settings, or download a similar app. This helpful setting can silence alerts for a specific time period with options to allow particular contacts to get through.