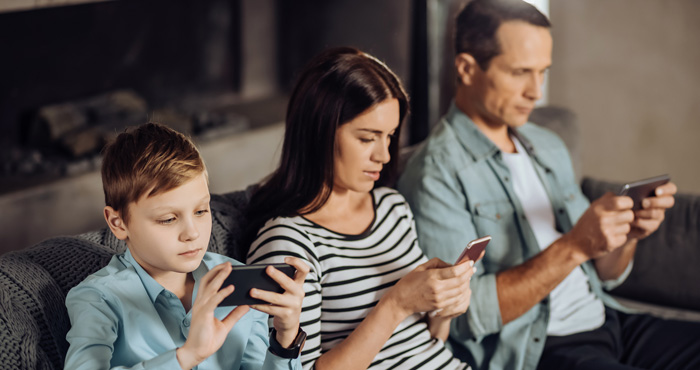 I have a love-hate relationship with my smartphone. On one hand, I can instantly video-chat with my dad on the other side of the world, find the fastest cycle route to the best Sunday lunch and win a game of "Words With Friends" on the side. On the other hand, even when I don’t want to do any of those things, I’m somehow drawn to its sleek, rounded edges, wondering what notifications might be lying within, untapped.

Could I do with building better digital habits? Probably. Compulsive phone-checking is one of the hallmarks of smartphone addiction, which comes with a whole host of negative syndromes and behaviors, some recently coined: "phubbing" — snubbing someone you’re with in favor of your phone; nomophobia — fear of being without your phone, which can lead to withdrawal symptoms like anxiety; and general distraction from whatever you were meant to be doing, even when the phone isn’t even in the same room.

Getting rid of bad smartphone habits

The addictive potential of our palm-sized gadgets is well-documented: The average American checks their phone 80 times a day, or every 12 minutes. For younger adults, that number nearly doubles to 150 times a day. After all, not only are our phones a conduit to friends, family, work and society at large, they’re also a key source of information and entertainment, whether we're browsing news sites, watching videos or playing a game.

Smartphones serve one of the fundamental needs of human beings: interacting with other humans by enabling us to call and send messages to friends and family.. “Where users passively consume traditional media such as TV, the interactivity of digital media from social networks to entertainment sites makes these extremely engaging,” says S. Shyam Sundar, distinguished professor and co-director of the Media Effects Research Laboratory at Penn State University.

That interactivity is sheer manna to our socially-primed mammalian brains: Not only can we use our smartphones to communicate with friends and find out about the world, we can even create content such as pictures and posts, put them in a public forum and receive commentary from our social network, all from our phones. Even the device itself is interactive, inviting swipes and taps.

“Smartphones self-trigger interaction through app notifications and other calls to action — in comparison, we have to decide to pick up a newspaper, or the remote for the TV,” Sundar says. “When you have lots of calls to action all the time, you can’t help but use the smartphone more than any other traditional medium.”

While overdoing it on screentime has been shown to have negative impacts on health, going on a "digital detox" just isn’t realistic, Sundar says — most of us require smartphones for integral daily functions like work emails, route navigating and staying connected with our social networks. Instead, try out these seven tips to change the way you use your smartphone, and technology in general.

1. Don’t charge smartphones in your bedroom.

Part of the addictive nature of the smartphone lies in its jack-of-all-trades capabilities: It can be your morning alarm, your newspaper and your inbox, all of which you can use first thing in the morning after you open your eyes. Start to slowly detach from your smartphone by charging it outside the bedroom, and buy an alarm clock instead — preferably one without the ability to check email or any other "smart" features.

At night, not having the smartphone next to your bed means you won’t spend that crucial last hour before sleep exposed to its sleep-delaying blue light.

2. Turn off all notifications — except for those from people.

Notification alerts can further hook you by triggering “calls to action”: A push alert might tell you someone has commented on a picture, triggering you to open the app, with a reward of a like or feedback from a friend. Or not — the unpredictability of the "reward" contributes to the compulsion of the phone-checking; it's part of the reason so many of us are addicted to refreshing our email inboxes.

“When you hear a ping or alert, you go through an orienting response and switch attention from your current task. People think they can multitask, but really they’re switching tasks on a micro-level to at least glance at the notification, which interrupts flow in the main task,” Sundar says. “Turning off your notifications nips the issue in the bud by limiting the calls to action.”

A good rule of thumb is to turn off all notifications except those that enable direct communication with people — in other words, block all apps and games from pushing alerts, including Twitter and Facebook (you can choose to keep receiving message alerts from the Facebook Messenger app if that’s a major source of communication). During periods when you can’t or shouldn’t respond to messages, enable Do Not Disturb from the Settings menu, which silences notifications and calls, too (you can finetune this to whitelist favorite callers, if you choose).

Another pitfall of a device that does it all is the insidious ease with which you can go from something productive — responding to a message — to something random — mindlessly tapping on that news app you always tap on, and all the way down the rabbit hole into an automatic scroll through your social media, the game you play, and the shopping app where there might be a sale….

To minimize these mindless jumps between apps, make it more difficult for yourself: Remove all icons from your home screen except for the bare minimum of functional apps. This might include your maps, ride-hailing, camera and messaging apps — apps you can dip into and out of without lingering.

On iOS, organize all other apps into folders — which puts an extra click or two between you and them — and put these folders on the next screen from the home screen. On Android, you can simply remove all app icons from any home screen so they must be accessed by typing a search or scrolling through the All Apps screen (reached by swiping up from any screen). By making it a little more difficult to get to them, each time you "want" to use an app, you’ll have a chance to ask yourself whether you really want to after all.

4. Turn your phone black-and-white (iOS and some Android phones only).

Many apps are engineered to be irresistibly appealing to their users — from the meditation apps that track streaks of meditation days, to games that reward check-ins with in-game gold. Social networks, in particular, fine-tune what each user sees with personalized tweaks through data collected during in-game use — think yourFacebook news feed and YouTube auto-playing recommended videos. The goal? To keep users in the app, clicking away, which helps apps turn a profit (through in-game advertising, for example).

According to the Center for Humane Technology, an initiative launched by former tech insiders that campaigns for technology design to be less destructively demanding of users’ attention, colorful icons and app interfaces are tantamount to little rewards for the brain, positively reinforcing the action of checking our phones. They suggest turning your phone display to grayscale to help reduce unnecessary phone-checking. Bonus: This can also help extend battery life.

In iOS: Head to Settings > General > Accessibility > Accessibility Shortcut > Color Filters. Here you can enable a feature to triple-tap the home button and toggle grayscale on and off (so you can maintain a color display when desired). For Samsung Galaxy S7 Edge and newer: Settings > Accessibility > Vision > Grayscale. To return to color, repeat these steps. Google Pixel and Nexus also have a hidden black-and-white option that can be activated if you enter developer mode (for instructions, head here).

5. Set a schedule for when you read and respond to emails.

Email is one of the major time-sinks of modern America, taking up nearly a quarter of the workday. Some companies that have banned email report an increase in productivity, with employees communicating instead via an intra-office social network.

Depending on how much your work requires you to be in constant contact, restricting when you check email could do wonders for your productivity. Try out a schedule where you only check two or three times a day — when you get in (or at the start of your day, if you work from a home office), just before lunch and at the end of the day, say; and bundle all your responding time together during one of the checking sessions.

Social networks from Instagram to Twitter often entice us to compare ourselves with others — all of whom appear to be enjoying exotic vacations, getting promotions at work, having adorable children and looking fantastic in spur-of-the-moment selfies. One survey found that Instagram was the most damaging network for mental health and self-esteem in teens and young adults.

“In daily life, we come across a healthy combination of people who seem better off and people who seem worse off. In social media, the balance is in favor of those who are posting about positive achievements,” Sundar says.

Yet going cold turkey on social media isn’t necessarily the answer. “In our increasingly digital lives, social media is one part of maintaining relationships. For senior citizens with mobility concerns, social media can additionally help combat social isolation,” Sundar says. Instead, as with email, set times when you can check social networks so that when you do, you're intentionally in the app, rather than mindlessly or compulsively scrolling.

“People who browse, as opposed to post, feel much worse in terms of self-esteem and envy because they see others’ good life more rather than celebrate their own life,” Sundar says. “Another solution might be to more actively post about yourself, which could mitigate some of the effects of upward social comparison.”

To reduce temptation, deleting social network apps from your phone might help, so you only check them from your computer — where you can use programs such as Anti-Social (Mac/Windows) to block social sites for a set period of the day.

7. Restrict phone use around people.

As much as our phones enable connection to other humans, the flip side is that we can end up staring at our phones in search of that connection — while another person is physically with us. It’s called phubbing, and common acts include scrolling through your social media apps during a lull in the conversation and attending to non-urgent texts while with someone else.

Phubbing has been shown to decrease marital satisfaction and negatively impact casual friendships. Even simply having a phone visible during a social occasion — such as on the table at dinner — can reduce the connection between two people. Studies also show that once phubbed, someone is more likely to turn to their own phone, leading to that all-too-familiar sight of a group of friends all heads-down, eyes on their devices.

Technology is an increasingly integral part of society — and one we have to learn to manage. “The idea is to customize how our smartphones behave so that we can take advantage of [their] features, while comfortably handling other obligations in life,” Sundar says.

So next time you’re with someone, try keeping your phone out of sight and its notifications turned off — and if you’re tempted to pull it out, stop and ask yourself why you need to check it. Chances are, you don’t.