How to Find out Who Called Me

These days when the phone rings and I don’t recognize the number, I usually just ignore the call. If someone really wants to reach me, they’ll leave a message. But when I’m expecting a call back from a doctor or am just curious about who called, I turn to a reverse-number lookup service.

The problem is that if you Google "free reverse number lookup" or some similar term, you'll get a lot of "people search" sites that claim to be free but actually charge a fee or provide a free trial to a recurring fee service  (which you have to remember to cancel, and they may not make it easy). Some sites I found are just plain deceptive, claiming free search and just forwarding you to the people search sites for affiliate commissions.

There is one free service I’ve found that does a far better job than the rest, SpyDialer.com. The site says they gather information from publicly available sources and has "billions" of phone numbers in its database. That sounds like an exaggeration, though I’ve tested it on mobile numbers, landlines, and Google Voice numbers, and most come back accurately. And, I’ve used it for months whenever I see a local number that I don’t recognize – I found missed calls from doctors, the pharmacy, my hair salon and more (often, the calling number didn't match the number I called for an appointment or prescription). SpyDialer will also tell you if it’s known spam. Occasionally, the service will show “No Record Found” (and it only works for US numbers) – it's not perfect, but it's pretty good.

IMPORTANT NOTE: One big downside to SpyDialer is that the interface is ugly and cluttered with ads for people search services that may cause you to click on an ad, rather than the site's own search box. Here is what it looks like when you search for a number using the correct boxes so you don't get misled by one of the ads.

1. Enter the number in the box and make sure “Phone” is highlighted in green. 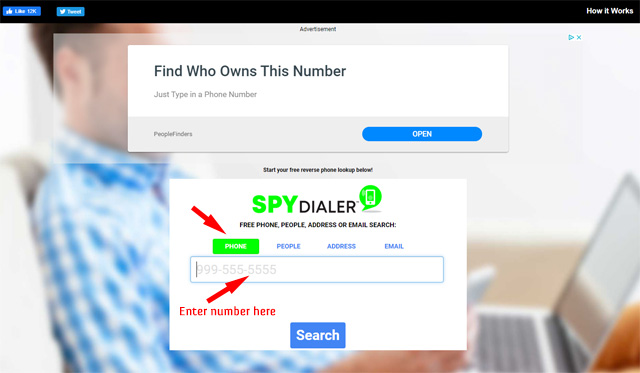 2. SpyDialer will tell you what type of number it is – mobile or landline—and give you the option for “Name Lookup,” “Photo Lookup,” or “Phone Spam.” Make sure “Name Lookup” is selected and click on “Search.” 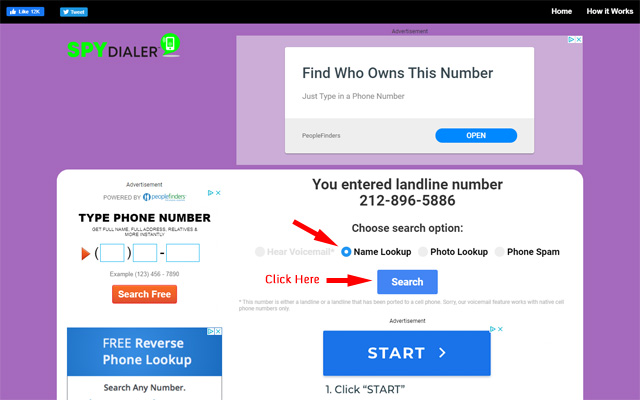 3. Here is the SpyDialer results page. You’ll notice the caveat that the data may be out of date. That always shows up. 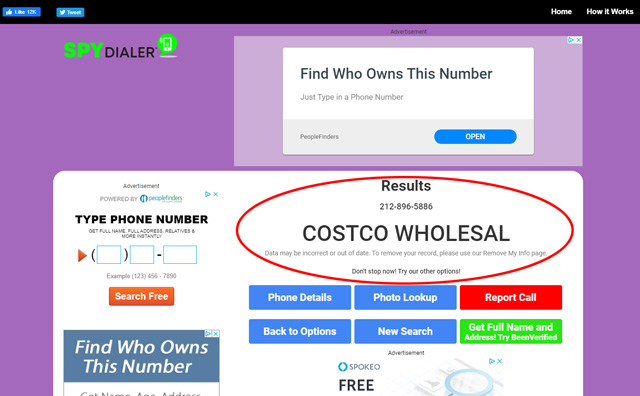 In addition to phone numbers, SpyDialer also lets you lookup people by name or email address.

I just tried spydialer for two cell phone numbers and they were both incorrect. These are numbers that these individuals have had for many years and the names came up wrong. Stop trying to get us to use bad websites.

I did a screen shot of my results its not free there is a.50 charge or 10 day free trial

SpyDialer is free. If you’re getting something asking for a fee, then you clicked on one of the ads (easy to do) rather than the correct service. And from the screenshot you sent me, it looks like that’s exactly what happened. Follow the instructions exactly as we have them listed above and you’ll get the correct, free result from SpyDialer.

I sent the screen shot to your email Now it says only works in the usa Whats up with that When were you going to tell us that?

Updated the story to note US-only

We hadn’t tested it for non-US numbers. We’ve updated the story to make it clear that it is US only.

SpyDialer isn’t perfect, but it has worked for the vast majority of numbers we’ve tested it with. It’s also the only free service we’ve found that will reliably give you an answer, as opposed to trying to upsell you into free trials or charge you fees.

It’s typical of USA websites to assume the USA is their only market. Who would have thought that the Internet is readily accessible (and used) by non-Americans?
Of course, the title of the site would have been “Find out who called me from the USA” by a considerate author.

Sad it’s US only.

In real checking of calls I didn’t answer, only 1 out of 10 numbers came back with a result. When I tested it with known numbers, I got results. The only benefit I see is that Spy Dialer is free, and actually checks the number you plug in rather than giving information on a range of numbers in the same exchange.

No results are helpful, also

The database is constructed from public records, so real people and businesses are more likely to have results than spoofed numbers or numbers that have never bee used for a legitimate purpose. So if no result comes up, that’s an indication it was just a spam call.

Totally useless. Stop putting up stupid articles like these that are virtually useless. I get lots of spam calls and doing a google I get more results than this link.

I entered 5 numbers from my Comcast VIOP phone and only got a hit on the one that actually had a name listed in the CID log.  I have had better results with other services.

Free, except for the part where we charge you...

Started by typing in my own number, they got the state right but that’s the only correct info they could come up with.  People finders?  I don’t think these guys could find there own mother’s with three people in the room.

You're using the wrong site

If you’re on People Finders, then you clicked on one of the ads (easy to do) instead of following the instructions we provided above. SpyDialer does not charge you.

Hi, just read your article but haven’t check the service you recommend. Many numbers to check. This message is to make a point to all those rude (nicely said) comments. If the service did not work for you then just carry on and keep on searching for a “good” service. A good percentage of calls I get are spam. At home we are always scanning calls and will not answer a: we know who is calling or b: when the caller is leaving a message. Any spam call will not leave a message and so far 1 in 10,000 do leave a message and still is a spam. Call the Federal Trade Commission (FTC) to report 1-888-382-1222 do not all.gov Don’t just expect others to do your homework, do it yourself, and Techlicious, let people know of the places, government or not, that are really helping with this nuisance. Thank you for your attention and stay safe, wear a face mask.

Bored with nothing better to do!

Hi Paty
Just wanted to say brilliant! Obviously I came to these comments a little late but reading over them I have to admit it was making me more then a little frustrated at all the people who have nothing better to do then to spend their day trying to punch holes in articles such as this! And then they don’t even do it right!! Lol. I agree with your comment and wanted to say nicely put!

gee! How fortunate we are to have such an Expert on board to lecture us! So much bla bla blawith little substance.You managed to say another without getting most anythingcorrectly 1. The FTC can do nothing about Robo Calls coming in on Spoofed numbers.Since you’ve done your homework,I don’t need to explain why 95% of the robocalls driving people crazy are not traceable ( because they’re made from overseas, that part) 2.Being so knowledgeable, of course you understand how when and why the DNC List was created and therefore know its extremely limited in usefulness for stopping most robocalls. Why? Because DNC lists are comprised *only* of legitimate,Registered USA Businesses, and its sole purpose was to stop Legitimate Businessesfrom making sales calls, aka Telemarketing, to residences after Normal Business Hours. Providing your information to The DNC list will have ZERO effect on the overseas calls coming in made by Scammers using Spoofed numbers. 3. Experts also understand that they must *never* answer calls on CID listing only a City &State and what happens once you take the call. And worse, what happens if you, from curiosity, return those odd CID missed call 4. Being adamant about contacting the FTC proves to me that you’ve not called them often and have maybe completed, at most, 4 Forms. Anyone who has attempted to use that arduous Form knows that the forms are long,  redundant, that 95% of the information required is about the Reporter and only lines asked about the actual call being reported and require details of which no one has kept such copious notes.  It’s a waste of 10 minutes. Imahine receiving 100 calls per month, worsening every year. WHY? The US Govt.,FTC,  technology cannot keep up,let alone compete, with the technologies of the overseas Scammers generating the robo/Spoofed calls. Before you assume people aren’t trying hard enough like you do…STOP providing antiquated advice and outdated solutions to problems which your knowledge and “expertise”  is scance-at best.

Thank you Josh/Techlicious. I tried this and got the results I needed. I appreciate you posting this information.
I’m glad you stopped replying to negative posts. Some people will never be satisfied, even when someone is providing free, helpful information. Sad that you have to defend yourself because you didn’t list EVERYTHING, as you were still learning the services capabilities. Apparently, screenshots and step by step directions aren’t enough.
I followed the provided instructions and viola! Results!
Thanks again for what you do.

Thank you for your comments. Glad SpyDialer worked for you.

Would like to add my gratitude to Josh/Techlicious and encourage all the negative Nellies to vent somewhere else. :>}

spydialer is not free

I click on the link you posted for spydialer and it is not a free service.

Yes, it is free

If you follow the instructions we provide above and don’t get misled by the confusing ads on the site, you will get the information for free from Spy Dialer.