Toxic Tech: The Poison in Our Products

by Christina DesMarais on August 20, 2012
in Tips & How-Tos, Computers and Software, Phones and Mobile, Music and Video, Green Tech :: 3 comments 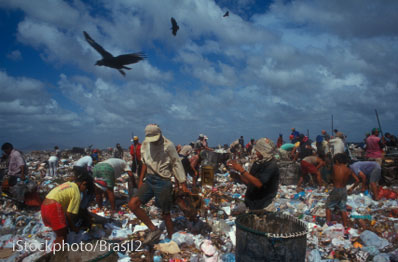 You probably know that you should never dispose of oil yourself, or vacuum up the mercury from a broken thermometer—the former contaminates ground water and the latter gives off toxic fumes.

But are you clued in to the toxicity of your electronics?

You may not know it, but electronics are composed of a wide variety of materials, including some—such as lead, nickel, cadmium, and mercury—that can pose health risks to people if they are leached into ground water or exposed to air. In addition, when electronics recyclers are able to retrieve valuable resources that can be repurposed, it means less mining for things like gold and copper and manufacturing of engineered plastics—activities that cause a great deal of greenhouse gas emissions and pollution.

It’s a no-brainer then, that if you’re concerned in the least about the environment and its effects on human health you shouldn’t throw your electronics away. But if you had to prioritize and determine which of the scads of them in your house are the most toxic and worst to throw away, which ones would be on the list?

Unfortunately, the EPA and several environmental groups I checked with don’t have that data, but look at the issue in terms of the incredible volume of tech that people need to get rid of every year and the resulting huge amounts of toxic or valuable materials ending up in landfills.

According to Barbara Kyle, national coordinator for the Electronics TakeBack Coalition in San Francisco, things that take up a lot of room are most often thrown away because people want them out of the house, whereas smaller devices such as cell phones and music players are easier to toss into a drawer and forget.

In her opinion, several categories of items are most often thrown away, but should be recycled instead because they are all composed of hazardous chemicals.

Older televisions made use of cathode ray tubes (CRT), which contained a lot of lead—between four and eight pounds of it per unit.

Lead, as you likely know, is not good for people, especially children who can suffer from brain and nervous system damage if they ingest it. In addition to being found in CRTs, it is often used in solder, lead-acid batteries, electronic components and cable sheathing.

Older computer monitors have the same problem as older TVs—lead in CRTs. While older LCD monitors don’t use lead, they contain mercury instead. Even if you fondly remember playing with the silver liquid metal back in chem class, it definitely isn’t good for you and can cause brain and liver damage.

“Mercury is also found in computer circuit boards, along with lead and cadmium. Circuit boards can also include batteries made of mercury, as well as mercury switches,” reports the website Earth911.

Really, the list of hazardous substances found in various computer components is exhaustive. Check out EWasteGuide.info to learn more about them, as well as the many ways the toxic ingredients can kill you.

Cadmium, which can seriously damage the kidneys, can be found in printer inks and toners.
“We buy tons of cheap consumer printers that are much cheaper to toss than to fix,” Kyle says. “They are practically ‘free with purchase’ and have become almost ‘disposable.’ Recyclers don’t even want them, since they have such low value –mostly plastic and a cheap circuit board.”

You should still recycle your printer, but a recycler might ask you to pay a small fee to take it, she says. “In some states, printers are covered under the mandated e-waste recycling programs.

Before you toss the VCR in your attic, keep in mind that it contains brominated flame retardants (BFRs) that have known toxic properties. In fact, everything on this list probably does, as well.

According to Greenpeace, “[BFRs] are highly resistant to degradation in the environment and are able to bioaccumulate (build up in animals and humans). Some are now widespread environmental pollutants, with higher levels generally being found in the atmosphere and rivers close to urban and industrialised areas.”

And as Kyle points out, “All electronics contain circuit boards, which is where many of the toxins can reside.”

How Much Toxic Tech are People Throwing Away?

It’s a shame more weren’t recycled. Reusing and recycling electronics, or what the EPA calls “e-Cycling,” helps others when you donate your old stuff to them, conserves natural resources when the valuable metals in devices are recovered, and protects the environment from toxic materials.

How to Find a Responsible Electronics Recycler

Another problem is some recyclers simply take your old products and ship them over to developing nations where children are often used to scavenge piles of e-waste looking for valuable components.

According to the Electronics TakeBack Coalition, you should use a recycler who is part of the “e-Steward” network, meaning they don’t export to places like Pakistan or China, and they follow other high standards. Many of them also will reuse and refurbish electronics.

The e-waste watchdog group offers a link on its site that will help you find one of these e-Steward recyclers, plus tips for other ways to responsibly offload your electronics if one isn’t located near you.

The e-waste watchdog group offers a link on its site

How about a link to the site—I can’t find it on google search or anywhere else.

Added a link in the

Added a link in the article and also you can find it here: http://e-stewards.org/find-a-recycler/