What We Know About the New Apple iPads & iPad Pro 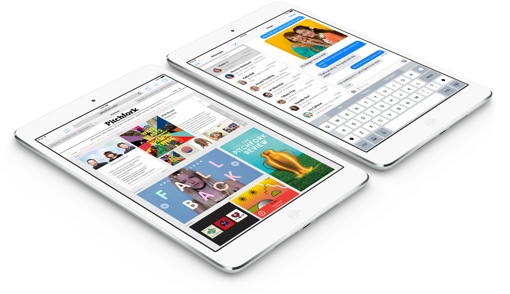 The current model year iPad mini with Retina display will likely
see a $100 discount when the new iPads are introduced Thursday.

On Thursday, October 16, computer giant Apple will hold a major media event where it will unveil the latest in its line of iPad tablets. The company is expected to talk about at least two devices: an updated version of the iPad Air and an updated version of the iPad mini with Retina. Apple could also reveal details on an entirely new device, a larger tablet being called the iPad Pro.

Official details on these devices are incredibly sparse. But as usual, some information has leaked to the public ahead of the event. Here’s what we think we know about Apple’s new-for-2015 iPad lineup so far.

The new 9.7” iPad device to be introduced Thursday will likely be called the Apple iPad Air 2. The ultrathin tablet is expected to include Touch ID functionality, a brand new, more powerful A8X processor and an upgrade to 2GB of RAM (from 1GB). Noted market researcher Ming-Chi Kuo of KGI suggests that the cameras of the iPad Air 2 should be in for an upgrade as well, bumping resolutions up to 8 megapixels in the rear and 1.5 megapixels in the front. Hidden code in iOS 8 suggests that the tab might also include an NFC chip to allow for Apple Pay compatibility.

You can expect the new iPad Air 2 to hit store shelves sometime in November in your choice of three colors: space gray (black), silver (white) and a new gold option. The entry-level iPad Air 2 with Wi-Fi will likely cost $499 for 16GB; a version with LTE will likely cost $629 for 16GB. The current generation iPad Air should continue to be sold with a discounted starting price of $399.

Apple is also expected to announce a new, upgraded version of the iPad mini tentatively called the Retina iPad mini 2. Only modest upgrades are planned for this 7.9-inch tablet, including Touch ID security and the A8 processor found in the iPhone 6 Plus. It will hopefully have a slimmer form than the current Retina iPad mini, and will come in the same three colors as the iPad Air 2. It’s price is expected to start at $399 when its introduced this November; the current iPad mini with Retina will likely continue to be sold at a new lower price of $299.

Rumor has it that Apple is also working on a larger, 12.9-inch iPad that’s being named the iPad Pro. It’s expected to have many of the same new features as the iPad Air 2, including Touch ID, a better processor and a better camera. It's larger screen is aimed at photographers, videographers and other professionals who need physical size and are willing to pay a premium for it. It’s not known whether Apple will introduce this tablet on Thursday, however. The Wall Street Journal is reporting that supply issues and unexpectedly high demand for the iPhone 6 Plus has pushed its release date into 2015.