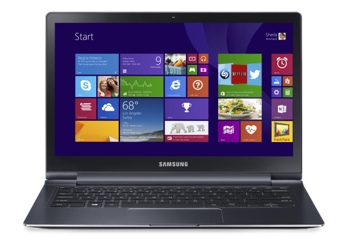 Microsoft Windows XP owners can get up to $100 off a selection of new
Windows 8 PCs, including the sexy Samsung ATIV Book 9 Plus Ultrabook.

Are you still using a computer that runs the antiquated Windows XP operating system? If so, good news: Microsoft will give you $100 off a new computer if you upgrade to a new device running Windows 8.1.

Under the terms of the Microsoft deal, you can save $100 on a new “qualifying PC priced at $599 or above” simply for owning a computer that still runs Windows XP. Microsoft is also offering free data transfer as part of the deal, so you don’t need to worry about losing any of your computer’s files.

As we’ve discussed here on Techlicious, if your personal computer still runs Windows XP, you’re playing with fire. Microsoft will be officially ending its support of the 13-year-old operating system on April 8. No security updates will be provided for XP after that date, regardless of severity.

To get the deal, all you need to do is visit the Microsoft Store website with a computer running Windows XP. Or, if you’d rather shop in person, you can bring your old computer in to one of the 80 Microsoft retail store locations nationwide.