The Future of Toys Is Augmented Reality

Augmented reality is one of those technologies that looks cool and clearly has promise but isn't often used in a way that doesn't come off as more than a gimmick. This is as true in the world of toys as it is in the world of tech.

However, this year looks like it will be a turning point if Toy Fair is any indication. The underlying technology in mobile devices is now powerful enough to handle augmented reality play patterns that go beyond just overlaying a virtual world on top of a real one. 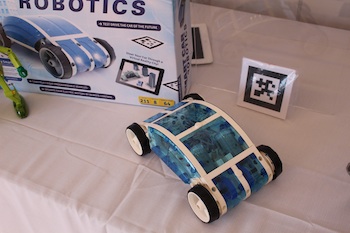 I saw a few new takes on basic AR experiences, such as picture books and temporary tattoos with dancing digital content kids can unlock with the right app. And there were several toys and games with digital content that unlocked with codes from physical toys.

The new Power Rangers Super Megaforce Legendary Ranger Keys take this concept one step further. The physical toy/key unlocks a special area in a corresponding app where kids can see themselves morphing into a Power Ranger before fighting the bad guy. Instead of just playing a character, they play themselves as a powerful super hero.

The most engaging augmented reality toys and games get kids involved in some way instead of only offering passive viewing experiences. For instance, the Smart Car from Thames & Kosmos is a DIY robot car kids put together themselves and drive using an iPhone/iPad app. On top of that, the car comes with AR tags that give kids the opportunity to create a virtual landscape for the car to drive through, either manually or by drawing a pre-determined path.

One of the best AR toys this year

One of the best examples of active AR engagement I saw at Toy Fair was Crayola's Virtual Studio Pro coloring sets. They come with special coloring books with templates for cars or fashions that kids color in using crayons, colored pencils, markers, whatever they have. Snapping a picture of the page using Crayola's app captures the dress or car and creates a virtual model.

The design, colors, stencils, and anything else kids color in end up in the virtual world. And the technology behind this is powerful enough that kids don't have to be perfect or even color inside the lines. The app smooths the color and designs out automatically, making their creations look a little more polished on screen.

Crayola goes further by giving kids something to do with the fashions or cars they create, such as creating a virtual fashion show or racing on a stunt course. From start to finish, kids are active creators instead of passive viewers. This is the kind of thing that moves augmented reality out of the gimmick stage. 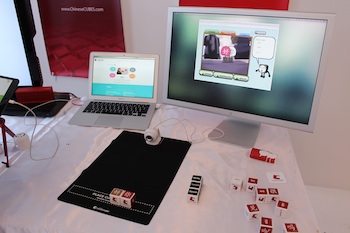 The future of AR

There's still a huge amount of potential to be unlocked in AR, especially when it comes to educational toys and games. I'm excited for the Chinese Cubes virtual language learning books introduced this year, but still prefer using the original physical cubes and the augmented reality-based computer program. Having a tactile, physical object to hold and manipulate helps some learn faster and retain information easier. Coupled with a digital tutor that can see you as well as the cubes while interacting with both in a meaningful way makes the overall system that much more powerful.

Though augmented reality has a variety of applications, the place it's most likely to flourish and have a lasting presence is in toys and games. With it, the toys above don't ever have to stagnate or fail to engage. Companies can add to and enhance the digital content without having to update or change the physical toys. Kids will love discovering new activities and parents will appreciate not having to toss toys after only a few months or years.

Do have a look at our first AR app- https://play.google.com/store/apps/details?id=com.Emantras.Francois&hl=en

This is a new term

This is a new term for me - augmented reality.  It’s the next step in interactive toys I guess.  Something I’ll have to follow more closely.