You'll Want to Upgrade to iOS 6 this Fall

Today, Apple announced iOS 6, the next generation operating system for iPhone and iPad. It's a big upgrade, with more than 200 enhancements. You'll be able to:

But, unlike an Android operating system upgrade, which rolls out by device over several months (if at all), everyone with an iPhone 3GS, 4 and 4S, as well as the latest generation of iPod Touch and the iPad 2 & 3 will get the upgrade when it's released this fall. Plus, it will likely debut on the iPhone 5, also due this fall.

Here's a rundown of our favorites from among the more than 200 iOS 6 improvements. 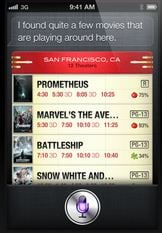 This virtual assistant isn't as smart as Apple or she thinks she is, but she will get a lot smarter and appear in more places with iOS 6.

First off, Siri will now be available on the iPad 3 with iOS 6. Over the next year, Siri also will be integrated into cars from Audi, BMW, Chrysler, GM, Honda, Jaguar, Land Rover, Mercedes and Toyota via a steering wheel button in an effort dubbed "Eyes Free".

Siri will also be integrated into Apple's new home-grown 3D Maps app, which will replace Google Maps. (Google unveiled its own 3D Map app for Android last week.) With Siri and Apple's Maps you get Siri voice-prompted turn-by-turn directions, as well as traffic and road incident information gleaned from fellow iOS 6 users.

In addition to directions, Siri will get smarter about sports, with up-to-date scores, stats, schedules and standings; movies, ask her what's playing locally and search by star or director; and restaurants, complete with reviews and reservations via Yelp and OpenTable.

Apple has sent planes and helicopters over major cities and landmarks to provide beautifully rendered overviews that users can manipulate from overhead to nearly street-view.

You don't want your kids to poke into every area of your iPhone or iPad, so Apple will let you disable certain functions within an app and/or restrict the user to using just a single app (such as guides museum tours, or school test apps). 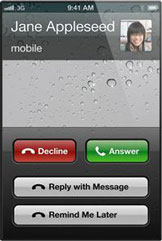 Instead of simply ignoring the in-coming calls you can't answer, iOS 6 will allow you to text a canned message to your caller, such as "Call you later" or "I'm on my way," as well as setting up your own custom canned response. iOS 6 also will remind you to call your caller back in an hour, when you get home or when you get to work..

Instead of switching to silent or Airplane mode, the customizable Do Not Disturb mode prevents your screen from lighting up or notification sounds from sounding. You can set Do Not Disturb to allow calls from certain callers or, if the same caller calls twice within three minutes, iOS 6 will assume the incoming call is an emergency.

Apple's voice calling app can now be used over the cellular network, not just through Wi-Fi. Plus, your cell number and AppleID are combined, which means FaceTime calls can be answered on both your iPhone and iPad.

Indicate certain correspondents as VIPs and their incoming mail will be segregated into a separate VIP inbox; ditto for flagged messages.

All your compatible tickets (plane, train, movie, concerts, etc.), passes and cards are collected into this new app. Using GPS and the internal clock, your ticket will pop onto the iPhone's lock screen when and where you'll need to show it. Passbook will also track balances on loyalty cards and update with schedule changes. 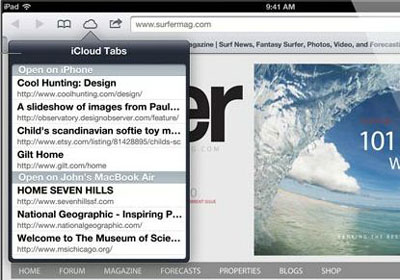 Like Yahoo Axis and a number of Android browsers, Safari will let you sync the tabs you view on your computer with your mobile devices. You can also mark pages for offline reading and take photos for use on a web page within Safari.

Do you know if they will be changing to new chargers for the new apple Iphone IOS? I hate to change since I have the Ipad 2 and it’s just easier to have them all be the same.

There's a huge ecosystem of

There’s a huge ecosystem of accessories that work with that connector, so I’m sure they’ve taken that into account.  Everything is just speculation at this point.