How to Block Numbers on Your Smartphone for Free 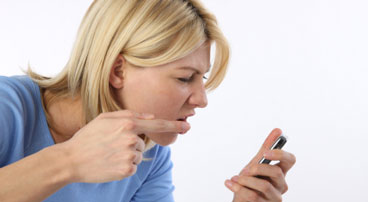 Cell phone spam is a real problem. In fact, one tech analyst writing for Forbes recently opined that the “Do Not Call List” doesn’t work and estimated as many as 100 billion robocalls—calls lacking a human being on the other end—and other solicitations are made to cell phones in the U.S. every year.

Another analyst told Bloomberg that in 2011 4.5 billion spam text messages were pushed out to cell phone owners, so you can imagine by now that number is even higher.

And, don't forget about clingy exes who keep calling, incessantly harassing debt collectors or weirdos from Craigslist who won’t stop texting you about the laptop you sold weeks ago.

So what can you do? Most wireless carriers will let you block at least a few numbers for free, so check with your carrier. You'll also want to find out how long the block remains in place because some carriers expire blocks. More robust blocking options are available on your smartphone.

For now, iOS doesn't support call and text blocking, but blocking is coming this fall with iOS 7. According to a recent Apple announcement, iOS 7 will include “Phone, FaceTime and Messages blocking to prevent specific people from being able to contact you.” And, in the meantime, you can download a silent ringtone (available in iTunes for $1.29) and assign it to any unwanted callers.

As for Android users, there are a few good free apps that you can immediately install on your smartphone to help.

Once you install the app, your answer call screen is transformed. PrivacyStar shows you the number calling you, as well as buttons that let you block the call, send the caller a text message such as “Can’t talk now. What’s up?” or “I’ll call you later” or a custom message you can define yourself. There’s also a history button you can tap to see how many times the number has called you.

Its call and text blocking features let you block specific numbers, entire area codes or all private and unknown numbers. PrivacyStar automatically hangs up or delivers a busy signal to blocked callers, and texts from blocked numbers never arrive on your phone.

The reverse call look-up feature is slick and lets you scan your call log and look up any number on it. When I tested it, the app was able to identify land lines well but less than half of the mobile numbers I tried.

The free version of the app comes with ads and only gives you real-time caller IDs and reverse call lookups for one week. If you want to keep those features, you’ll have to ante up for a paid subscription, which is $2.99 a month. By doing so you also lose the ads.

Unlike Privacy Star, this app doesn’t completely highjack your regular Android call-answer screen. It just adds a small box that lists the caller’s name and when he or she last called you to it.

You can go into the app, see your call log and mark calls as spam, block numbers or look them up. In fact, reverse call look-up is fantastic with Mr. Number and can identify not only home and business landlines, but more than half the mobile numbers I tried. The only minor caveat is you only get 20 reverse call look-ups for free—after that Mr. Number charges you $0.99 for 20 more.

If a business line calls you, the app performs a free Caller ID lookup to find a name. If Mr. Number figures out what company it is, the app will show you more information about the company, such as any offers it might have running, its location and a link to the website.

You can also manage your block list by specifying which numbers you always want to hang up on, send to voicemail or make exceptions for—meaning you could block every call from your hometown area code except ones coming from your mom.

This one is a lightweight call blocker and text message filter. You can block any number from your contacts list, call log or message log, as well as add numbers manually. Plus, you can set the app to block private numbers or all calls and texts. When calls are blocked, they're sent directly to voicemail. You can also turn notifications off, so you don't have to be notified every time a call is blocked. And if you want to see who's been calling, the app keeps track of all blocked calls.

Just last night, I searched Techlicious for an article on apps just like these. Not finding any, I was going to take a little time this morning to email Techlicious to ask for help on this.

Keep up the good work!

...so just call me Cream Cheese!

Earlier today, I was worried that my hearing may lose its edge in the near future. Well, Antenna TV’s Sanford and Son episode, playing as I type this…focuses on Sanford’s going hard of hearing!

Lyn and Nita, thank you very much for your ideas! Android (at least Jelly Bean, anyway) does enable blocking contacts—where “blocking” means sending calls to voicemail.

Lisa, last time I checked Windows Phone had no call blocking apps. Then again, that was a year or two ago and I’d certainly hope they’d've been working on it.

Mr. Number is not responding...

I’ve emailed Mr. Number several times to ask about some of their required permissions, but—even after (1) mentioning how I “heard” of them here and (2) stating that if I continued to receive no response I would post here about it and also try PrivacyStar—I have not heard back from Mr. Number.

Well, I tried PrivacyStar and got some quick responses. I asked them about their permissions, and they’ve been very helpful.

Just one thing. Their permissions include both Read Sensitive Log Data and Read Call Log. The latter I completely understand. For the former, all they will say is that it is “related to the way the app monitors [my] phone app as well as the call log and text messages.” Beyond that, they won’t say anything because they fear it would give away their proprietary technology.

What do you think?

It sounds like there are no vetted apps yet for call blocking on Windows phone. Is that correct?

I’m assuming you know that the fed.gov. recently awarded a $50,000. price t 2 individual who have come up with a way to block robo calls. Both are still being developed.  I have registered at the http://www.nomorobo.com site to be notified when available. I have no idea how they will work or is there will be a charge or not. But I am very anxious to see what is released.
I am so tired of keeping up with these trashy call.  I put them in my address book on my phone with the name of “scam, + date”  When another one comes in I edit it and add the date. So I have a record of the repeat calls.. I also check them on http://www.800notes.com to see if I can figure out who it is.  But the downsize if that my address book is 1/2 scam calls.  But with the dates I can go back and delete the not repeated calls or old ones.

Since iOS doesn’t have an option to either block certain numbers or send them straight to voice mail, I created a contact named “DO NOT ANSWER” where I store all unknown and unwanted numbers. Then I assigned the least annoying ring tone to it. When i receive a call from the “DO NOT ANSWER” contact, I’m not scrambling to answer! Works for me!

I need a app now

If you have an iPhone, they have a feature that allows any number to be blocked.
If the number is in your contacts:
Select the phone app (where you make a call). Open the contact you want to block. Scroll to the bottom of the screen and select “Block this Caller”. You can unblock a contact using the same steps, except the “Unblock this Caller” option will be displayed.
If you have an android phone, you can send any unwanted caller straight to voice mail. This is how I handled unwanted calls on my android phone.
Create a contact specifically for all anonymous unwanted calls (I named mine “Do Not Answer”). When you receive a call that you don’t know and want to “block” it, add the number to this contact.
Open the contact you want to “block”. Depending on your version of android, select the following:
Android 2.x. -  scroll to the bottom of the contact and select the “Options” box on the bottom left, check box by the “Incoming calls-Sends calls directly to voicemail”.
Android 4.0+ (Ice Cream Sandwich) -  touch the 3 dots in the top right hand corner. From the pull down menu check the box ” All calls to voice mail”.

help with my android s4

For anybody passing by who uses blackberry and feel out in the cold (as far as call blocking and apps go), I have a tip for you - Turn on your phones parental controls under settings. You can adjust these so that only contacts listed on your phone are able to get through. Very useful for those who use their blackberry’s privately yet find all the market apps totally useless. Unrecognised numbers simply receive a “caller has hung up” message and obviously your blackberry will not ring or disturb you.

Another app for blocking calls and sms from unwanted numbers on android phones is called “AntiNuisance”.